Mazda goes to the power of 3 with its new saloon

The Mazda3 is a family car with great looks and the latest technology – but with only two engine choices, and a high price, it may remain a niche buy

The Mazda3 is a family car with great looks and the latest technology – but with only two engine choices, and a high price, it may remain a niche buy . Video: Neil Briscoe 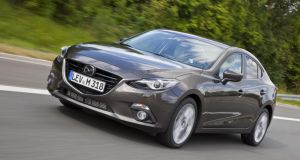 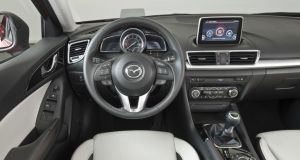 Mazda is a motoring conundrum. It’s a mainstream brand with mostly niche-model appeal. It’s a Japanese minnow holding its own on the global stage against the massive multi-brand motoring behemoths. Despite its highly respected engineering heritage and some cutting-edge innovations, it has opted to hang its future on incremental improvements.

And it’s a car firm with a level of brand recognition and a selection of models that should put it much higher up the sales tables. Mazda ended 2013 in 15th place in terms of Irish sales. It was outsold by Mercedes.

Despite its well-held reputation, with cars such as the MX5 and the CX5 crossover, the brand depends largely on two models: the Mazda6 and Mazda3, representing more than 60 per cent of its new-car sales.

The good news is that with new versions of both on the forecourts, there should be a sales surge in 2014. Yet, even with two cars which should pit it directly against the big-market mainstream brands, Mazda’s engine mix and pricing means that even these mainstream models are pitched at relatively niche segments. For those of us who hold the brand in high esteem, it is frustrating to watch.

Best-looking cars
Our annoyance is fed by the fact that both the Mazda6 and this new Mazda3 are amongst the best-looking cars in their respective classes. Taking its cue from a group of seductive concept cars designed by Laurence van den Acker (now head of Renault’s design team), Mazda has a family look that’s second to none on the mainstream market.

Driving through Dublin in this new Mazda3 saloon proves the case in point: it’s hard to remember a time when a relatively practical mainstream family car attracted as many second glances and car-park queries.

Much of this is driven by the fact that its new look is strikingly different - and much better - than the outgoing version. There’s further good news for Mazda in that its strongest look is with the saloon version. It’s longer than the previous model, with more leg and shoulder room, and has a larger boot, up to 419 litres in the saloon, along with a sense of strong build quality inherent throughout. It might not be as roomy as a Skoda Octavia, perhaps, but it’s practical enough for a family of four.

The new Mazda3 also boasts the latest technology, including a cloud-based content service provided via the Aha app, which lets you access podcasts and audiobooks, and can even read out your Facebook and Twitter messages. It’s just one of the features controlled through the 7-inch colour screen mounted on the dash of all saloon versions and all but the entry-level hatchback. Controlled by a large dial and buttons located next to the handbrake, it’s well-formatted and intuitive.

Limited reach
So we come to the engine range, and this is where Mazda’s limited reach compared to its big-brand rivals starts to show. Just two engines are on offer in the Mazda3: a 1.5-litre 100bhp petrol and a 2.2-litre 150bhp diesel. Both seem a little large for the Irish market, but the Japanese are quick to point out that in both cases, breakthroughs in compression ratios and overall weight reductions has resulted in competitive fuel economy and emission levels. The petrol version manages 5 litres per 100km (56.5mpg) and emissions of just 118g/km, while the diesel achieves 3.9 litres per 100km (72.4mpg) and 104g/km.

The diesel powertrain in our test car was impressive, but then it should be given that 150bhp is more than most others offer in this class. It’s well matched to a nice short-throw manual gearbox and there’s never an issue with performance.

Handling is respectable, if not as sharp as we might have hoped, and the saloon tends to understeer when pushed. Similarly the rear doesn’t react as sharply to tight turns as we have encountered in the likes of the Ford or models from the VW Group of brands.

However, the single greatest hurdle the Mazda3 in Ireland has to overcome is its price. The starting price for the diesel is €25,295, pitching it at the upper end of rivals. The Ford Focus saloon starts at just under €22,000 for the 1.6-litre 95bhp diesel version, or €19,795 for the 1.6-litre petrol.

The larger engines clearly have an impact on costs, and the new Mazda3 pricing means that, apart from the entry-level version of the hatchback, the range is priced at the upper end of the market. This was also the issue with the new Mazda6: pricing at its launch meant it didn’t compete with the big-volume versions of rivals in the family saloon segment.

It’s a shame, but the Mazda3 is likely to fall just outside the budgets of many hatchback buyers. However, if it’s within reach then it’s worth a serious look, particularly given the high level of specification that comes as standard on the saloon models. Many motoring fans harbour a soft spot for the Mazda brand, thanks in part to models such as the MX5, and its sharp styling will certainly prove a draw. This Mazda3 should push them further up the sales rankings, but a limited engine range will prevent it from causing a serious dent to sales of established rivals on the market.

Hands hurting from all the handwashing? Here’s how to show them a little TLC
9