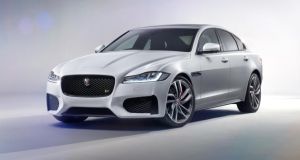 Magnifying glass at the ready to spot the changes on Jaguar’s new XF.

Meet the new boss, sang The Who, same as the old boss. Has Jaguar been dragging some old 12” LPs out of the back of the cupboard while designing the new XF? It certainly looks so because the car unveiled today in London, ahead of a full public debut at the New York motor show, looks barely any different to the outgoing one. The same big, square grille, the same narrow, squinting eyes, the same curved roofline and pert boot. The casual observer is going to need a magnifying glass and a tape measure to tell old XF and new XF apart on the road.

“In creating the all-new XF, as a design team we have been driven by discipline, the discipline of simplicity. Every exterior line on the XF has a clear purpose – nothing is superfluous. Achieving that simplicity takes time and requires great determination; it’s all too easy to add lines to a car, but much harder to addcharacter by leaving lines out” said Ian Callum, Jaguar’s design director at the launch. Reading between the lines, the careful evolution of the XF’s shape is about a combination of not upsetting the existing customer base and trying to re-inforce Jaguar’s design language. It’s a strategy that has worked well for Audi, anyway…

Underneath of course, it’s all change. Out goes the old steel chassis (closely related to that of the 1998 S-Type and the Lincoln LS) and in comes a new 75-per-cent aluminium chassis, very closely related to the one propping up the new compact XE saloon. It’s 30 per cent stiffer than before, claims Jaguar, has 50:50 front:rear weight distribution and is as much as 190kg lighter than before to boot.

Inside, although the new XF is slightly shorter overall than before, rear seat passengers have more space thanks to an extra 51mm in the wheelbase. Jaguar says that it has the roomiest back seats in the class. Up front, again, there is much familiarity in the overall shapes and styling but there is new technology. A 10.3-inch touchscreen, running Jag’s new InControl infotainment system, takes care of settings and entertainment while a larger, 12.3-inch TFT panel displays the main instruments, sat nav and control layouts.

Jaguar hasn’t quite managed to break the 100g/km barrier when it comes to Co2. The lowest-emitting new XF will be the 161hp 2.0-litre diesel, taken from Jag’s new ‘Ingenium’ engine lineup. For the first time ever in an XF, a manual gearbox will be offered and this will trim emissions to 104g/km. That’s around 10g/km less than a BMW 518d can manage. A 180hp version of the same engine will be available as will a tweaked and updated 296hp 3.0-litre V6 diesel. Petrol power will come initially from a 375hp version of the F-Type sports car’s supercharged V6 engine, but a 2.0-litre turbo petrol Ingenium unit will also eventually be offered in a variety of tunes, as will range-topping supercharged V8 versions. Jaguar is also said to be working on a plugin-hybrid version in conjunction with transmission supplier ZF.

The new XF gets the same electric power steering as the XE and, as before, adaptive dampers for the suspension. While four-wheel-drive will be an option in some markets, Jaguar is also offering a new traction control system, called All-Surface Progress Control, which should keep rear-drive XFs mobile when all about is snowy and white.

The new XF will go on sale in the autumn of this year in Europe, but will effectively be ready for the 161-registration period for Irish customers. It’s a key part of Jaguar’s planned expansion from selling around 80,000 cars globally last year to reaching sales of more than 200,000 by the end of this decade.

And just in case you weren’t convinced that the XF is both light and secure in its road holding, Jaguar this evening had a stunt driver coax a new XF across the river Thames in London, suspended only by two narrow steel wires under its tyres. Perhaps not the sort of driving feat customers will try to replicate, but it’s always nice to know what a vehicles’ capabilities are, eh?