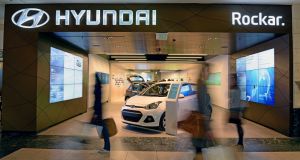 The Hyundai-Rockar store in the Bluewater shopping centre, near London, has been a massive success in its first year, drawing 100,000 visitors to the physical store.

Bouyed by the success of the Rockar franchise in the UK, Hyundai Ireland is showing a keen-ness to open Ireland’s first ‘Digital’ car dealership. The Hyundai-Rockar store in the Bluewater shopping centre, near London, has been a massive success in its first year, drawing 100,000 visitors to the physical store.

The idea behind it is to do away with the traditional out-of-town ‘glass palace’ car dealer and downsize the operation into something more like an Apple store.

Usually, only one or two physical cars will be on display, but there are interactive touch-screen walls, tablets and more for customers to browse and choose, while instead of the traditional car dealer sales staff, there are so-called ‘Rockar Angels’ who are on hand to help with any questions but who are not there to specifically sell any cars.

Trade-ins and test drives can be organised, but the idea is actually to buy a car as you would a laptop - do your research online, have a quick nip into the store to look at and poke and prod the physical thing and then click ‘buy.’

It has been a success, albeit one with a small conversion of customers from browsers to buyers. Around 1,000 sales are forecast for the Rockar outlet for 2015, which may be only 0.5 per cent of a conversion rate, but that’s still around double the number of annual sales which an average UK Hyundai dealer would get.

More significantly, a whopping 95 per cent of those customers are new to the Hyundai brand, and they’re significantly younger - with an average age of 37 compared to the 54-year-olds who visit the trad dealerships. Simon Dixon, chief executive and founder of Rockar, said: “We’ve already had over 100,000 people visit the Rockar Hyundai store in Kent’s Bluewater Shopping Centre since its opening just over six months ago. When looking at the success of Rockar so far, it is clear that challenging the historical approach to car buying is the way forward.”

No wonder Ireland is so keen, but there are some things holding back the final ‘go’ decision. Mumblings of potential discontent from the ‘trad’ dealer network is one of them, and an unsurprising worry - a shopping centre dealership will have to pay higher ground rent than an out-of-town one, but will have much lower overheads overall, and effectively no stock costs.

Staffing is another issue. Although they don’t necessarily need to be motoring experts, the ‘Angels’ still need to know what they’re talking about and with Saturday and Sunday opening hours, their wages will be quite expensive. And then there’s the traditional nature of an Irish car buyer - will we seriously be tempted, en masse, to start clicking and swiping, instead of kicking tyres and slamming doors?

It certainly seems that Hyundai Ireland thinks to, albeit it’s going to be a slow-and-steady build rather than an overnight change. Currently, the vast Dundrum Town Centre shopping mall in south Dublin is the most likely venue for the first digital Hyundai dealer, although The Irish Times has learned that a final decision is being held up by the high-end shop rents charged there. It’s possible that a city centre location, one that provides better value if not quite the same trendy postcode, might finally get the nod.

After that? Locations in Cork and either Limerick or Galway will likely follow pretty quickly. The face of car buying in Ireland could well be about to take its first real shift away from the plate-glass cathedrals and into a brave new binary world.