How BMW’s 3 Series got its magic back 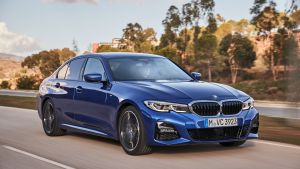 Being of a similar vintage, I have always had an affinity with the BMW 3 Series. We were once much lighter and quicker on the turn. Of late we’ve struggled to shed the pounds and keep up with the newcomers, in its case the taller crossover set. Neither of us are at the right end of the market these days. Yet the BMW now seems best placed to overcome its middle-age angst.

The 3 Series was for decades the class leader for those seeking a premium badge on a relatively sporty saloon. Many buyers fumbled their way into the 3 Series, seeking social status from the brand, and accidentally ended up with a car that was the best in its class to drive.

Recently, however, it has faced serious challenges. On the one hand the competition has got much better. The Mercedes-Benz C-Class is going through some halcyon days, with a build quality and offering that matches the badge. Audi is finally getting its A4 up to scratch, even if the driving end of things is still not on a par with its BMW rival.

Then there is the SUV onslaught. Even at BMW there’s a car park full of X models, sacrificing driver pleasure in favour of height.

To understand the history of the 3, you need to know your Es. There’s an in-house code used for each of the seven generations of this car, and it’s widely referenced by BMW aficionados. The first iteration – E21 – was a gorgeous pointy-nosed affair, like a land-based shark and just as nimble.

The next – E30 – was for me the pinnacle of range, a standard-bearer of brilliance in the 1980s and early 1990s. While some refer to the company’s 2002 as the benchmark for the brand, the real template for “the ultimate driving machine” was set in stone by this 3 Series.

The E36 was nice to drive but a bit of a frump to look at and the start of period when the 3 Series became heavier and paunchier with the arrival of the E46 and the E90.

The launch of the F30 in 2011 was meant to address these concerns but it just couldn’t reawaken the passion, which by then had moved to the 2 Series coupe, the true inheritor of the E30’s DNA.

That’s enough alphabet soup for now, save to say that this seventh generation is the G20.

The good news is the latest 3 Series is closer to the early iterations than we’ve seen in years. It’s light, nimble and agile. It’s also shed 50kgs along the way, no mean feat for a car that retains its relative roominess inside.

The new 3 Series is based on the company’s latest platform, shared with the larger 5 Series among others. That’s a positive, for its larger sibling is still a serious draw – and one that lured many buyers away from the last two iterations of 3 Series.

The weak points are the styling: the 3 Series continues to evolve, but it’s taking on a lot of creases and sharp turns. Those come naturally with age, but they do seem a little overworked on this saloon, like it’s trying a little too hard.

Inside, current owners will not be too lost. The start button wisely moves down to the central console, while there are optional digital dials that take on the styling similar to those in the latest Citroens.

Actually, that Gallic inspiration continues underneath, where the BMW engineers, taking inspiration from other recent developments at Citroen, have developed new hydraulic suspension stops to wash out the rebound bounce you get after the suspension bears the brunt of a pothole or speed bump. Basically, instead of solid bump stops it uses a narrower additional part of the fluid-filled suspension cylinder to muffle the bounce. The end result is brilliant. Add on an optional electronically-controlled differential at the rear and you have the recipe for success that seemed to have fallen behind the cupboard at BMW for a while.

So confidence-inspiring in fact, that BMW let us loose on the Portimao race circuit in the Algarve to try it out. The 3 Series in question was the upcoming M340i. It’s a complicated track with 15 challenging turns over 4km, several of them blind bends that you land upon after going full throttle over a crest. You need faith in car, its ability to corner.

On the track the M340i showcased not only the latest suspension but also the car’s impressive braking and grip.

Across the board, in all iterations of the new 3 Series we tested showcased the most impressive feat of the new car: its steering.

You go and stop with your feet; you may get the sense of a car’s balance through your bum, but you drive with your hands and steering feel is what makes you feel a part of the trio of human, car and road. Too often in modern cars – and in virtually all SUVs and crossovers – electric-power steering systems have washed out all the feedback and feel. This 3 Series is one of the very few relatively affordable cars you can buy that retains that sense of driver engagement and fun. Rivals please, please, please, take note. Even so, BMW could improve matters: its fat M Sport steering wheel is too thick and padded to deliver all the promise the system has to offer.

On road or track, though, you get a sense of composure at speed. Throw it at an unexpected corner and the dial moves from slight understeer to a little oversteer without drama.

Another area of improvement on the 3 Series is in acoustics. The car is noticeably quieter in the cabin, even in the 320d, which always trumpeted a gruff note into the car when pushed. This is far more refined offering from BMW than in the past.

This will be a car economists will be watching as well: expect a return to petrol power amongst 3 Series buyers, symbolic of an overall market shift. Many will be delighted to abandon the diesel, for the 330i is a very sweet engine and we expect the same from the lower-powered 320i.

Where the 3 Series frustrates is in its adaption of what are supposed to be driver aids. The only thing these manage to do is aid rising blood pressure and frustration. We wanted to give the BMW techies the benefit of the doubt – after all, this is the company that brought us the iDrive, which was initially ridiculed before being adopted by all its rivals. However, after two days’ testing we were left screaming obscenities at the voice controls system while our irate hand gestures were misconstrued by the motion controls as orders to turn up the volume or send the air-con into overdrive. BMW needs to stop using its paying customers to Beta test technology that is simply not ready for the road. Thankfully these elements are optional or can be switched off as required.

The real essence of the 3 Series is not in the infotainment or tech gadgetry: it’s on the road and in the apex of a corner. Badge snobbery may lure you in, but the drive will reassure you that you made the right choice. The 3 Series may be middle-aged but it has rediscovered its mojo.