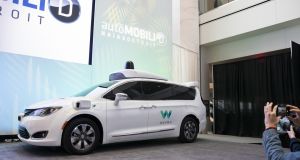 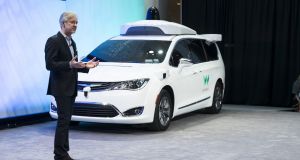 There are shiny new sport utility vehicles, brawny pickups and sleek saloons. But the unlikely star of the annual Detroit motor show is an odd-looking minivan capable of driving itself.

The van, designed by Google, grabbed the spotlight on Sunday, the first day of press previews at the show. The vehicle’s introduction highlighted the industry’s fascination with autonomous driving vehicles, as well as the rising sway of the technology industry in the motor business.

Google’s parent company, Alphabet, spun off its driverless car project last month. The new business, called Waymo, is considered a sign that the company is ready to commercialise a decade of research and development of a vehicle operated solely by computer.

The people carrier shown on Sunday is the first fruit of those labours.

In many ways, it looks like a conventional minivan. But it is also equipped with the self-driving sensors and vision systems developed by Waymo, some of which protrude from its body.

That combination is telling. The car was built by the Detroit automaker Fiat Chrysler, making it the first heavyweight collaboration between a major automaker and one of Silicon Valley’s elite. And it shows how Waymo, widely considered the leader in autonomous driving technology, hopes to sell its self-driving systems to car companies unwilling to bear all the costs of developing vehicles.

Some automakers, like General Motors and Ford Motor, have committed to creating their own driverless cars. Both companies recently announced plans to build their first fully autonomous vehicles at factories in Michigan.

But Google is intent on offering another option to automakers by creating a ready-made package of self-driving equipment that can be integrated into mainstream vehicles.

The chief executive of Waymo, John Krafcik, said on Sunday that the company had sharply reduced the cost of producing the radars and other high-tech components needed to achieve fully autonomous driving.

“We’ve brought all of our self-driving sensors in-house,” Krafcik said. “It’s all designed and built from the ground up by Waymo, with every part manufactured with one goal in mind: to safely handle the complex task of full autonomy.”

By doing so, Waymo is positioning itself as a mega-supplier to the industry, and a turnkey solution to transforming conventional cars into driverless models.

In the past, industry analysts were doubtful that automakers would work closely with tech companies, which were perceived as potential competitors in their core business of making and selling new vehicles.

“The auto industry has to date expressed a collective wariness to allow players like Alphabet too close to the data generated by today’s car platform,” Adam Jonas, a Morgan Stanley analyst, said in a recent research report.

The collaboration between Waymo and Fiat Chrysler has broken new ground and whetted the interest of other automakers. Last month, Honda said it was in talks with Waymo “to integrate its self-driving technology into Honda vehicles”.

Other automakers, however, are choosing to keep their self-driving research private. GM, for example, has acquired outside tech companies to bolster its own engineering teams, and it recently announced plans to manufacture self-driving versions of its new all-electric Chevrolet Bolt at a plant in suburban Detroit.

Ford Motor is also pressing ahead with efforts to introduce a new fully autonomous vehicle by 2021, and other carmakers are on similar paths, although some of their efforts are focused only on adding driver-assist features that control some of a vehicle’s functions, rather than developing cars that do not require a human driver to operate.

Hanging over the industry is the potential for new US federal regulations addressing whether a self-driving car needs a steering wheel and pedals to operate on public roads. While the Obama administration has consistently supported the move toward autonomous cars, it is not clear whether president-elect Donald Trump will adopt similar policies.

One company that is hedging its bets is Fiat Chrysler, which is smaller and less profitable than its rivals GM and Ford. Rather than spend billions on autonomous driving projects, it opened its doors to Waymo to convert a hybrid-electric Chrysler Pacifica minivan into a self-driving vehicle.

“Strategic collaborations such as this one are vital to promoting a culture of innovation, safety and technology,” said Sergio Marchionne, Fiat Chrysler’s chief executive.

Fiat-Chrysler’s result on display at the North American International Auto Show in Detroit was a people carrier adorned with swooping plastic scoops that contained sophisticated sensors and radars installed by Waymo.

The car does have a steering wheel, primarily because some states, such as California, require one during testing on public roads and highways.

But Krafcik, Waymo’s chief executive, said the vehicle was “capable of getting you door to door without a person at the wheel” and represented major improvements in the costs associated with self-driving systems.

He said that when Google began working on autonomous vehicles in 2009, a sophisticated sensor system using lasers could cost as much as $75,000 from an outside supplier. By manufacturing the components internally, the company has cut the cost by 90 per cent.

“This is a big step in making this technology affordable and more accessible to millions of people,” Krafcik said.

For its part, Fiat Chrysler modified the electrical systems and other components of 100 people carriers built at a Canadian assembly plant and then delivered the vehicles to Waymo to add its proprietary self-driving equipment.

The vehicles have already undergone testing at the automaker’s track in Michigan, and Waymo plans to start driving them on public roads in Arizona and California this month.

Krafcik did not provide a forecast for when Waymo’s self-driving technology would be available for sale directly to automakers or ride-hailing companies like Uber and Lyft. Instead, he said, the company is “mastering the hardware and software to build a better driver for a truly self-driving car”.

While it is not showing off new models in Detroit, Fiat Chrysler did announce Sunday that it will boost its US employment by 2,000 jobs when it adds new Jeep SUVs to factories in Ohio and Michigan.

In another sign of the industry’s rapidly changing landscape, the carmaker instead chose last week’s consumer electronics show in Las Vegas to introduce an electric concept vehicle targeted at young buyers.