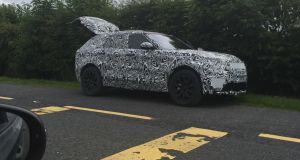 Land Rover test vehicle in the west of Ireland: likely to be the next generation of its Discovery range

One of our eagle-eyed spies spotted this heavily camouflaged Land Rover development car in the west of the Ireland, and it can only be the new Discovery. While the Range Rover and Range Rover sport are also due for a facelift shortly, they’re not getting the sort of full-body changes that would necessitate this much disguise tape.

The new Discovery will be quite a departure for Land Rover. While the current car, in production since 2003, has proven to be a refined and comfortable model, it has not strayed far from the utilitarian roots of the original 1988 Discovery, and has always kept its bluff, upright, relatively simply styling. This one is clearly very heavily influenced by current Range Rover styling, and is far sleeker and more low-slung than any previous Discovery. It should look quite a lot like an up-sized Discovery Sport, in fact.

The new Disco will also be far more technologically advanced than any previous model. It will borrow the lightweight (relatively) aluminium chassis from the Range Rover Sport, and should have for the first time in more than a decade a four-cylinder engine as its entry-level model, based on the current 2.0-litre Ingenium unit. Expect a very classy cabin, full of practical touches and with the requisite seats for seven.

The Disco is just one in a convoy of new SUVs coming our way, particualrly at the top end of the market.

Those still asking the question ‘should Rolls-Royce be making an SUV at all’ have clearly not received the memo on modern-day car sales. The SUV is everything right now, buyers of cars of all sizes and at all price points love them and desire them and any car maker not willing to apply its badge to a high-riding 4x4 is putting its bottom line at risk.

Yes, even Rolls-Royce. The first-ever Rolls-Royce SUV is set to go on sale in late 2017, or possibly early 2018, more or less alongside the next-generation Phantom saloon. That car is currently under development and it will use a newly-designed aluminium spaceframe chassis, which will eventually go on to underpin all of the Rolls-Royce model range.

The SUV, which so far has been working under the code-name of ‘Cullinan’ (named after the largest flawless diamond ever found, a 3,000-carat whopper which was cut and polished into two huge gems, both of which form part of Britain’s Crown Jewels) is currently undergoing prototype testing using a hacked-about Phantom saloon bodyshell. The shorter rear doors and panels are clearly evident on the prototype car, as is the higher ride height, and Rolls-Royce has confirmed that although the we can’t draw any hints to the Cullinan’s styling from the testing hack, the overall dimensions are around the same, suggesting that it will have roughly the same footprint as the 5.8-metre Phantom.

Power will, initially, come from the 6.6-litre V12 turbo engine already found in the Ghost saloon, as the 6.75-litre V12 engine from the Phantom will be slowly phased out ahead of the next generation models. In the Ghost, that engine develops a maximum of 606hp and can sprint from 0-100kmh in just 4.8secs. Although the Cullinan will be heavier thanks to both a bigger body and the weight of a 4WD system, its performance should be pretty impressive, albeit that would suggest it will be slower than the Bentley Bentayga, the appearance of which has stirred Rolls-Royce into creating its first SUV.

In fact, Rolls people don’t even use the term SUV, preferring to say instead that the Cullinan will be “a high-bodied car with an all-new aluminium architecture, that can cross any terrain.”

We can safely expect it to have a truly luxurious interior, and prices will only start at around the €450,000 (and no, that doesn’t include taxes and delivery). There has been no word yet on either a diesel nor a hybrid powertrain, and both are known to be something of anathema to Rolls-Royce owners. However, as Bentley has plans for both in the Bentayga, don’t rule anything out.

As for the name? Rolls-Royce boss Torsten Muller-Otvos is known to be a fan of the Cullinan badge, but in keep with the Ghost, Phantom, Wraith and Dawn, it’s much more likely to be a revival of a name from Rolls’ past – Camargue, anyone?

Meantime, for those of us keen on the idea of a luxurious, roomy 4x4 but without the wherewithal to buy a Roller or a Bentley, there’s always the new Land Rover Discovery.

Elliot Dallen died last week. This was the final article he wrote
8