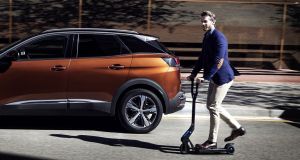 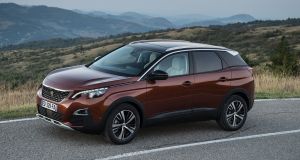 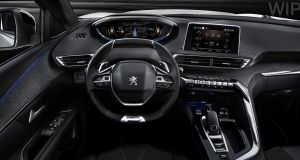 Peugeot 3008: the new cockpit is a real premium format and the small steering wheel is a winner

Sumptuous Italian daylight can make the most rancid looking car seem like a looker.

Thankfully misty and dank driving conditions were on hand to heighten the critical senses as we took to the roads around Bologna in Peugeot’s mulit-coloured 3008.

The historic capital of the Emilia-Romagna region, home to the world’s oldest university, is better known for two wheeled motoring rather than four.

I took the opportunity to pop in to Ducati motorcycles and have a drool, sorry a highly critical look, at the firm’s production line. The workforce build up to 350 motorcycles per day depending on the time of year. Ducati has makes 35 models from a family range of seven types. As a motorcyclist it was an awesome experience to witness the birth of these machines.

A build bike starts with the engine and works outwards. Bad design and poor engineering has literally nowhere to hide on a motorcycle but with a car it can be disguised with a few panels and a nice paint job.

With this in mind the 3008 would have its work cut out to impress me. For the last few years Peugeot has been telling us it wants to move upmarket into the premium sector, something easier said than done.

Badge snobs and motoring critics simply won’t be told how to perceive a brand. It will be a while before buyers drop the name Peugeot in to conversation alongside the usual premium suspects like Audi, BMW & Mercedes Benz but it might just happen in the future.

Remarkably, after just two days of testing albeit in highly specified level 3 ‘Allure’ and level 4 ‘GT Line’ 3008s my eyes have been opened to the French brand’s ability to be upwardly mobile.

A beautiful new dashboard features an easy to use digital i-Cockpit. This impressive bit of technology is standard across the 3008 range and it is right up there with Audi’s cost option version. The main computer generated dials can be customised via the steering wheel controls. You can select and priorities the information seen like speed signs or navigation instructions. Other premium features are either standard or optional on the five trim levels: Access, Active, Allure, GT Line and GT.

The stunning Focal sound system fitted to my first test car, a GT, was crisp with a tight bass response. Real oak veneer trim panels, that would be at home in an Audi A6 or Mercedes E Class featured too.

The original 3008 cabin was a very comfortable and cosseting place but the new car’s interior is exceptional for its class that presently is dominated by the Hyundai Tucson. While I’m still caught up in the international launch hype I’m tempted to refer to Peugeot from now on as ‘the formerly mainstream car company Peugeot’.

Peugeot’s new direction is built on solid foundations. The Peugeot Design Lab sub division over recent years has penned some fantastic objects ranging from pepper mills to grand pianos and there is even a Peugeot-styled helicopter. With the 3008 the lab’s influence is very present and the piano key like interior dash switches are as cool as Mini’s toggle switches.

The 3008 sits on the same platform used extensively by the PSA group to underpin a broad range of vehicles.

In the metal the 3008 has a strong SUV presence that is instantly likeable whereas the 2009 car was an ugly duckling. The five seat crossover features a stronger looking front end with a more imposing Peugeot family grille. The body features some nice design touches and the styling overall is quite sophisticated. The flanks around the C pillar show off strongly styled body lines in the metal and the design attention continues through to the rear end. Peugeot signature lion’s claw taillights have a 3D aspect that is smart looking. There is a definite nod to the 1950s with a new optional two tone paint finish. This unique paintwork allows for a combination of complimentary colours to be used. Its a quirky gimmick that possibly could be troublesome when trying to tax “What colour is your car sir?” “Eh...”.

The new 3008 is longer, slightly lower and the same width as the original that went on sale in Ireland in 2009. Sadly gone is the split tailgate that was a unique selling point. Weight has had to be saved to make the car more economical and emissions friendly and the mechanism, while brilliant, had to go.

The new tailgate features a low sill that makes loading easy. Our higher end test cars featured an electronic open and close function via a push button and a leg kick remote opening function is optional also. The big boot holds 520 litre or 1580 litres with the rear seats folded, will have another option that we last saw on the Dodge Nitro SUV - a pullout boot floor.

Peugeot’s accessories list for the 3008 features a foldable electric assisted push scooter and an foldable electric bicycle. Both can be plugged in and charged in the car’s boot. As a middle aged skateboarder, yes I was one of the original split roller skate bolted to a plank of wood riders, I loved the easy to use e-Kick scooter. However my 13 year old would not be impressed by it as it has a limited steering lock, so no tailwhips are possible, plus the rear wheel is fat and almost flat in profile to aid stability for old folks like me.

The engine range and pricing is still being finalised for Ireland but the outgoing car starts at around €26,000 on the road. We can expect a 100hp and 120hp 1.6 litre diesels to be the volume sellers followed by the excellent 130hp 1.2 litre petrol. A 180hp 2 litre BlueHDi Automatic ‘GT’ tops the range for now. Peugeot debuted its Hybrid4 diesel hybrid in 3008 and while that format has now been scrapped, a new petrol hybrid is on the cards for 2019. Peugeot offers markets very low emissions ‘VLC’ engine variants and these versions that save just a few g/km of CO2 may be brought to Ireland if the figures add up.

A mix of road surfaces from smooth autostrada, nice B roads and craggy country roads were tackled over two days in diesel and petrol powered 3008s and the experience was pleasant and comfortable despite riding on big 19-inch alloys. 3008 features Peugeot’s smallest steering wheel. Sitting below the i-Cockpit instrument display the sporty wheel is slightly flattened at the bottom and top and it makes driving to the shops feel sporty. The automatic gearbox works well in 3008 and features a new, and here we go again, beautifully styled lever. A six speed manual gearbox will be standard on Irish cars.

Peugeot’s clever electronic Advanced Grip Control is well worth getting. This traction control aid has improved and as it is sold with all weather tyres it helps the front wheel drive 3008 deliver traction almost like an all wheel drive. Traction settings feature Normal, Snow, Mud, Sand and ESP Off modes that are selected by twisting a dial near the gear lever. In addition to AGC you get HADC, which is a hill decent control system that is capable of very low speed. To test the system we loaded up a car with four Adults and went straight down a steep grass bank that was covered in dew. Not only taht but we had the manual car in neutral and the driver’s feet were off all the pedals. This counter intuitive action allowed us to experience how following the press of a single button the car would automatically apply the brakes to any or all four of the wheel to maintain grip and steering function. The 3008 performed electronic witchcraft as we made it to the bottom of the hill safely and under control.

The new 3008 will land in Irish showrooms in LHD guise before year’s end. Right hand drive deliveries will only begin when supply comes on line at the end of January or start of February at the earliest.