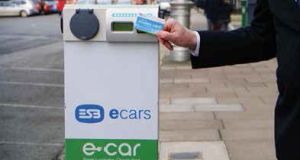 Since the beginning of Ireland’s slow-burning affair with the electric car, one of the major carrots to encourage people to take a chance on battery motoring has been that the ESB has been providing free access to charging points located around the country. All you had to do was apply for a smart card to wave in front of the charging point’s sensors and off you went with free and easy access to the now-800-strong network.

This week the ESB announced the free charging was coming to an end from January, when there will be charging for charging.

ESB’s E-Cars programme says that from January for new customers there will be a €16.99 month fee. That will include unlimited access to the low-speed one-phase charging points (of which there are slightly more than 800 nationally) but there will be an additional 30 cents per minute cost for using one of the high-speed three-phase charging points, of which there are 70 and which are mostly located along the major motorway and inter-urban routes.

That means that the standard fast-charge time, which generally speaking will charge an empty battery to 80 per cent full capacity in 30 minutes, will now cost €9 per charge. That sounds cheap compared to a full tank of either petrol or diesel but the devil is in the detail.

An average current Electric Vehicle (EV) has a nominal range on one charge of around 160km. To go 160km in a diesel-engined car, assuming an average of 5.5-litres per 100km (or 51mpg, well within the capabilities of almost all diesel saloons or hatchbacks) would cost you, at the current average pump price of €1.20 a litre, €10.56. Suddenly, all-electric motoring doesn’t look quite so cost effective.

Certainly, the ESB’s announcement has raised the ire of more than a few EV drivers. Alan O’Reilly drives a Nissan Leaf and has hitherto been an electric car enthusiast, but the new prices have driven him to launching an online petition against the charging. “I do honestly believe it is down to the way the charging is being introduced, both the concept of paying just to have access and the high 30 cent per minute charge on Fast Charge Points. I also believe the way this has been communicated has only increased the frustration and anger” he told The Irish Times.

“I think it may well push some people away from EV, many are on PCP or other finance options where they have he option to hand back the car and this will increase the chances of them going back to an internal combustion engine. I am on PCP and always hoped by 2017 the next generation of EV would be available for extended range but if these charges remain in place I can see myself moving away from an EV. I definitely think this will be deter people thinking of going electric.

“I think they need to scrap the current plans, engage with the users of the system and push the Government for more support to allow charging of users based on usage similar to the rate people enjoy at home with a small premium for fast chargers. The communication has been awful the ESB were forced into communicating after details were leaked online. The details announced promise further plans in the future but there are no details which leaves those looking to buy an EV wondering what is coming.”

Mr O’Relly’s petition had 324 signatures at the time of writing - a considerable number when you realise that there are only around 1,700 EVs on Irish roads. He intends to have a meeting with ESB E-Cars next week and present the petition to them.

However, Gareth Davis, the head of ESB E-Cars, is already moving to head off such criticisms. “We’re in the business of having customers and we’re making plans to meet all their needs. This is only the first plan, and we’re only applying it to new customers from January. Existing customers will still have free access until April when the new plans will kick in for them. There will be other payment options, which we’ll be rolling out in January, and they’ll be designed to meet different needs. I can’t give any details on them yet, as it’s commercially sensitive information, but I can say that we want to make the network attractive and that we will be trying to accommodate both heavy users and those who use public charging points maybe only two or three times a year.”

Mr Davis said that most users will continue to do the majority of their charging at home, using the wall-mounted charging points which the ESB is still committed to providing for free for the first 2,000 EV buyers. The points are worth around €900 and Mr Davis said that there should be an adequate supply of them through to April, assuming current EV take-up rates.