Driverless tech at a crossroads

Car manufacturers are moving from stamping metal to scripting software

In Finland, the Easymile EZ-10 electric mini-buses, capable of carrying up to 12 people, will roam the open roads of Helsinki’s southernly Hernesaari district in a month-long trial, negotiating traffic for the first time. Video: EasyMile 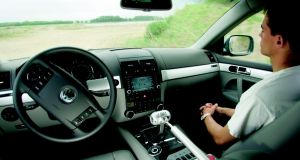 The new way: when a driver disengages from events on the road it takes some time before their attention can refocus.

The motor industry is in the midst of an existential crisis. Thanks to the endeavours of Henry Ford and later Toyota engineer Taaichi Ohno, car plants churned out metal products in such volumes and so efficiently they became licences to print money.

The basic engineering of the combustion engine evolved, but the principles remained the same: small explosions of fossil fuels driving pistons to turn a crankshaft. Inside the cabin things got plusher, with radios, electric windows and even a few safety features such as seatbelts and later airbags. With an average of seven years between replacement models, the pace of change was steady and manageable.

In the last decade we have witnessed the first serious fundamental shift in terms of powertrain (engine) technology. Last week the Dutch announced plans to ban traditional combustion engines from the nation’s roads by 2025. Electric car sales are pretty lacklustre here right now, but there is no doubt the popularity of Tesla and the commitment of car makers to roll out ever more electric models will eventually lure buyers away from the pump and towards the plug.

Long-term the solution may be battery fuel cell technology, which offers the impressive range, but requires an enormous infrastructure investment to roll out hydrogen filling stations. Governments and suppliers will want cast-iron guarantees that fuel cell is the chosen route before committing to it.

Coinciding with this is the biggest revolution in transport since we dismounted the horse.

Fully autonomous vehicles will be with us in the next decade, if the car executives and software giants are to be believed.

As with most revolutions, preparations have been under way for years. A system that tracks the distance from the vehicle in front and accelerates or brakes accordingly is a not uncommon feature in a wide range of cars currently available – and was first brought to market by Jaguar as early as 1996. A few carmakers have jumped to the next level, where the vehicle will take control of steering.

BMW, Audi, Mercedes, Volvo and Tesla all produce cars that contain some features that would be classed as driverless.

Almost by stealth, the focus has shifted from stamping metal to software development. The basis for driverless cars is largely in place. The final hurdle is bringing it all into play in unison and matching it up with the most accurate and updated navigation data.

Aside from driverless cars powered by electricity or hydrogen, the very basis of ownership is up for grabs. Nascent car-sharing schemes have been around for some time but their day in the sun may be near. With more buyers turning to leasing deals such as Personal Contract Plans (PCPs), they are starting to realise that outright ownership is not always the best way to spend their income. Unlike houses, these are depreciating assets after all.

Car sharing schemes also means that for a monthly fee users could avail of a portfolio of models depending on their needs at the time. So you could have a city car for the commute, a seven-seater for the school run and the weekend and perhaps something a little premium for a night out or a weekend away.

Dealerships then become depots and sales staff relate with customers on a weekly or monthly basis instead of just a cold call every three years. And as users won’t actually be driving these cars, it will be all about the entertainment on offer inside. Give car designers free licence to dream and they talk about car windows that convert to interactive screens.

And with more accurate technology traffic jams can be eased as cars automatically re-routed to maximise road use, while the distances between vehicles can be radically reduced.

It all sounds a bit like sci-fi, but the technological leap is not that great.

It may all be a utopian or dystopian vision of the future, depending on your viewpoint. And the transition is going to be tricky.

We are well aware of the problems with humans in charge of vehicles. Ultimately the driver has the potential to decide who lives or dies. Handing that control over to electronics means - provided it works - a constant standard of safety without distraction.

The problem in the interim is in trying to combine the human and the robot. When a driver disengages from events on the road it takes some time before their attention can refocus.

Take a likely scenario. The self-driving system is engaged and you are checking emails. The system suddenly sounds an alert that the driver needs to take back control as it has encountered a situation it’s unfamiliar with. You turn your focus to the road, but it takes several seconds to get your bearings, figure out what is happening and what needs to be done. By the time you act it may well be too late.

The riddle of how to alert a snoozing driver to an impending crash, and give him enough warning to take control of the vehicle and brake, has warned some carmakers off attempting interim systems.

“We have not found a technology that can ensure driver engagement,” said Raj Nair, Ford’s chief technical officer, when explaining the carmaker’s decision to push for full autonomy over halfway-house technology, after exploring the possibilities for 10 years.

Toyota’s US engineers previously said that the problem of handing back control to a human was “fundamentally unsolvable”.

Ford’s choice is to make the big leap, dispensing with pedals and the steering wheel when it comes to designing its self-driving car, due out in 2021. Such is its faith in the technology on which it is working.

BMW, Volvo, Toyota, Nissan and GM have all laid out ambitious target dates for similarly autonomous vehicles on our roads. No doubt legislators will have to play catch-up with the technology.

Motorists will also have to place a lot of trust in the car firms to provide them with totally reliable software. When your computer crashes it can cause consternation and cost you hours of work. If the car software crashes it could cost you your life. Trust in car brands has not always been a strong point and that’s perhaps the biggest hurdle that needs to be overcome before we’re all catching up on Netflix in our personal car pods during the daily commute.

There is a lot to play for and enormous uncertainty, but that’s what revolutions are all about.