Series of diesel tax rises, to match duty on petrol, proposed due to air quality concerns 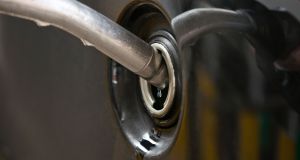 The plan calls for a year-on-year rise of 2.18 cent a litre for diesel over five years. The move would push prices up over 117 cent. Photograph: Justin Tallis/AFP/Getty Images

The first in a series of rises in the price of diesel is likely in the October budget as the Irish Exchequer seeks to match it with tax charged on a litre of petrol. The move is said to be in response to growing concerns about urban air quality in the wake of the diesel emissions scandals which have rocked the car industry.

Pre-budget papers drawn up by senior government officials stated: “The OECD have recommended at least an equalisation of excise rates on petrol and diesel to address negative externalities caused by the combustion of these fossil fuels. The basis of this suggestion is the lower tax rate on diesel fails to account for the social and health environmental externalities caused by its combustion. A litre of diesel produces approximately 15.5 per cent more greenhouse gases than a litre of petrol.”

It adds that any advantages a diesel car has over petrol in fuel consumption is a benefit to the driver and does not account for “the externalities”. The paper was released in mid-July and comes from a tax strategy group within Ireland’s finance ministry, but it also had input from several other ministries and the Taoiseach’s office.

The plan calls for a year-on-year rise of 2.18 cent a litre for diesel over five years, as a way of discouraging people from buying diesel cars. According to the AA, the average price per litre of diesel is 116.6 cent, so it would push prices up over the 117 cent mark immediately, and would raise the price of filling a 60-litre tank by around €1.30.

If the fuel price escalator is introduced, diesel motorists could end up paying an additional €330 million in tax.

Car owners, and those who have bought diesel cars since 2008, may well feel aggrieved. The then Fianna Fáil-Green coalition government changed the motor tax and vehicle registration tax systems from one based on engine size to one based on emissions of carbon dioxide. Before the changeover diesel – which has lower CO2 emissions – represented just 20 to 25 per cent of the new car market. After the tax change, diesel became the favoured choice, with a 75 per cent share of the market.

Eoin Bannon of environmental think-tank, Transport and Environment , said: “To consumers, this situation was not their fault. They were misled about clean diesel. But when a policy is harmful it should be revised. Tax modifications, like those planned in France and Belgium, should be made gradually over a period of years to reduce impact on consumers and give them time to adapt.

“There is no basis on environmental and health grounds for diesel vehicles to have an advantage over petrol ones. By removing the fuel-tax gap between diesel and petrol, diesel cars can compete on a level playing field.”

Sustainability consultant Enda Buckley is promoting the proposed equalisation along with a network of groups including An Taisce and the Irish Environmental Network. “The UK has already equalised diesel and petrol tax,” he says. “Belgium will have done the same by the end of 2018 and France is making rapid progress. In Ireland, the next step is to grow a national political consensus for the five-year programme.”