Chris Evans could be the wake-up call for Top Gear 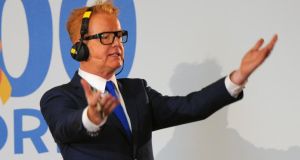 Top Gear’s new host Chris Evans: How will the Top Gear faithful react? It’s hard to say, and certainly there are some extremists out there.

Will Chris Evans be any good as the host of a revived and revamped Top Gear? Well perhaps the only fair answer is to say come back and ask again in a year. The 48-year old radio and TV mogul has only just announced that, following rumour, denial and comedy sketch, he will take over from a disgraced Jeremy Clarkson and become the main host of the most-watched TV show… in the world.

The fact that you’ve just read that last line in Clarkson’s distinctive baritone shows the mountain that Evans must climb. Clarkson, along with James May and Richard Hammond, has become synonymous with televised motoring in the past decade-and-a-bit, as Top Gear, a programme which started off as a regional half-hour filler became a broadcasting behemoth, garnering a global audience of 400-million.

Evans is no stranger to big audiences of course – he currently presents the morning breakfast show on BBC Radio 2 – formerly the home of Terry Wogan – and is closing in on the 10-million listener mark, which makes him by far the most-listened to radio presenter in all of Europe.

From TFI to Top Gear

Evans cut his teeth with Channel 4’s The Big Breakfast, an anarchic early-morning TV show which made a virtue of being (or at least appearing to be) haphazard and unstructured. Evan’s chatty, ebullient personality lent itself to such a style and he took that persona and rolled with it, creating the smash-hot chat show TFI Friday, also for Channel 4. Co-incidentally, TFI returned this week for a valedictory 20th anniversary one-off, pulling in 3.7-million viewers and calls for the series to be re-instated. Evans initially agreed with those calls, saying that he couldn’t sleep the night before broadcast, such was his excitement over TFI being seen again. His ardour for a return soon cooled though, and now we know why.

Of course, Evans had filmed a short skit for the TFI revival, featuring none other than Jeremy Clarkson, who attempted to teach Evans the correct intonation for the famed “…in the world” catchphrase. Evans made reference in the sketch to his ruling himself out for the Top Gear job – a point he has made many times on the Radio 2 show – but clearly the BBC has changed his mind. Perhaps the lure of re-moulding such a globally successful show around himself was too strong to resist. Perhaps the BBC merely waved an impossibly large cheque under his nose.

Or perhaps it was the simple appeal of the cars. Evans is a confirmed car nut – he currently has a garage full of close-to-priceless Ferraris, including a 250 GT California formerly owned by actor James Coburn. Evans also owns an ex-James Hunt Hesketh Grand Prix car, a humble VW Beetle and a Mk1 Ford Escort Mexico. He is certainly not short of car-nut credentials, and is even close to F1 supremo Bernie Ecclestone, with whom he organises an annual group trip to the Monaco Grand Prix to be auctioned off for charity.

How will the Top Gear faithful react? It’s hard to say, and certainly there are some extremists out there, such as those who drove actress and presenter Sue Perkins off Twitter with death threats and insults when it was rumoured she was in line for Top Gear duties. Will Evans’ broadcasting experience and deep love of cars mollify them? Or is it Clarkson Über Alles for such so-called fans?

For his part, Evans appears delighted. “I’m thrilled” he said this evening. “Top Gear is my favourite programme of all time. Created by a host of brilliant minds who love cars and understand how to make the massively complicated come across as fun, devil-may-care and effortless. When in fact, of course, it’s anything but and that’s the genius of Top Gear’s global success.

“I promise I will do everything I possibly can to respect what has gone on before and take the show forward.”

Kim Shillinglaw, Controller of BBC Two and BBC Four, said: “I’m so delighted that Chris will be presenting the next series of Top Gear. His knowledge of and passion for cars is well-known, and combined with his sheer inventiveness and cheeky unpredictability he is the perfect choice to take our much-loved show into the future.

“Chris is a huge fan of Top Gear and has great respect for the craft and work ethic of one of the best production teams in the world. He knows the phenomenal attention to detail it takes to make a single sequence of Top Gear, let alone a whole series. He is already full of brilliant ideas and I can’t wait for him to get started.”

Tim Davie, CEO of BBC Worldwide, said “it‘s fantastic news for Top Gear fans around the world that such a brilliant broadcaster as Chris will be the figurehead for the brand across the globe.”

The BBC has confirmed that production of a new Top Gear series, to be screened in 2016, will start in the next few weeks, which presumably means that co-presenters for Evans have also been lined up. Clarkson’s cohorts, Richard Hammond and James May, have on-going contracts with the BBC, but both have said that they would not countenance working on a new Top Gear without Clarkson.

Assuming there is no change of mind, the most likely candidates would seem to be actor Philip Glenister (who co-presents Channel 4’s For The Love Of Cars) and former model Jodie Kidd (who co-presents Channel 5’s The Classic Car Show and is an accomplished amateur racing driver) but there could yet be surprises in the lineup. After all, Hammond was an unknown quantity before Top Gear propelled him to stardom. For that matter, so was May. For that matter, so was a bubble-haired and denim-jacketed Clarkson all those years ago.

Top Gear has been through a long retinue of presenters. From Noel Edmonds and Angela Rippon in the early days, through the nineties trio of Clarkson, Quentin Wilson and racing driver Tiff Needell and onto the global superstardom of Clarkson, Hammond and May.

In that sense, Evans appointment is merely the latest in a long line. His style will be far less combative and controversial than that of Clarkson, a fact which will likely equally endear him to and distance him from the current fan base. Given time though, he has to potential to take the series to ever greater heights.