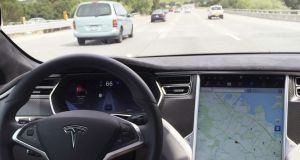 Tesla’s autopilot system in operation: China has banned the use of experimental autonomous vehicles on its roads

China has banned the use of experimental autonomous vehicles on its roads. Limited testing in public will be allowed on low-speed roads and in rural areas, but so-called “robot car” testing will be banned from highways and motorways, leading some to suspect that China has simply decided that the development of home-made autonomous cars is simply not worth the risks to public safety.

The news comes at a worrying time for autonomous vehicles. Following a prolonged period of being the “next big thing” it could be that some experts in the field are now taking a step back from full automation and total robot control.

Tesla is robustly defending its cars’ in-built auto-pilot system following a fatal accident involving a Model S saloon. The Model S of 40-year old Ohio resident Joshua Brown didn’t spot that a high-riding truck had pulled out across the road in front of it and the collision killed the driver.

While the American National Highway Traffic Safety Authority (NHTSA) has begun an investigation into the incident, Tesla boss Elon Musk has pointed out that such an accident was inevitable and that the software requires the user to agree and acknowledge that it’s a “public beta test” and not the fully-finished article.

Musk said that a fatal accident occurs in the US for every 94 million miles driven, and that the Tesla system had effectively beaten that number, having been used for about 130 million miles so far.

According to Musk the on-board systems may not have noticed the truck in time because its trailer was mounted very high off the road and, with the setting sun behind, the system may have believed it was an overhead gantry sign, which it’s programmed to ignore. “Autopilot is getting better all the time, but it is not perfect and still requires the driver to remain alert,” said Musk, who also pointed out that the system still needs a driver to remain alert and to keep their hands on the wheel.

In a statement, the NHTSA said: “The opening of the Preliminary Evaluation should not be construed as a finding that the Office of Defects Investigation believes there is either a presence or absence of a defect in the subject vehicles.”

Volvo has been heavily involved in the development of self-driving cars, and the new S90 saloon and V90 estate are among the first cars available in Ireland to feature a system which will steer and guide the car at high motorway speeds.

However, Volvo’s chief executive Hakan Samuelsson has said that full, total robotic autonomy is not what the company’s aiming at, and that especially in densely-populated urban areas, drivers will still have to do the work themselves.

“We have no ambition to have a car that could drive in urban environments from A to B. If you’re a normal consumer, is that really what you are dreaming about? We believe more that in a situation where it’s not really fun to drive, you can switch on the autopilot and then sit back and do something else, using that time more productively. That is the product we are developing” Samuelsson told Autocar magazine.

It’s most likely that the roll-back from full autonomy (if roll-back it is) is mostly down to the sheer cost of the systems needed to make a car fully aware of the environment around it.

According to experts, while technology giants such as Google are willing to bear the enormous cost of developing such systems, the burden is too great for car makers working on tight margins, at least in the near term.

Futurologist and technology expert Don Norman told The Irish Times that “for autonomous cars, it’s going to be a long time. The car makers are pushing it faster than is safe. They’re all capable of doing the same thing and the difference is the corporate structure that decides whether it’s safe to release it or not. Mercedes is the leader in what it’s allowed its cars to do, such as some automated highway driving.

“But look at Tesla, which announced that it could do so much, that the car could automatically pass other cars and so on. Well, I’ve been working with companies, and they’re all working on the same technology, their cars can all do the same things, but they’re not ready to release it yet. Tesla released it and said it was great, and now they’re apologising and drawing it back, and we all predicted that – the cars are just not ready yet.

“Teslas are remarkably good cars, but on top of that the easiest driving is highway driving. City driving is much harder, and no one is ready for that yet. And the Google car is not a good comparison, because they use extremely accurate mapping and much more expensive equipment than would ever be possible on a commercial car, and even Google says that they’re going to kill somebody some day, and that’s just because it’s just inevitable. So I’m still talking decades before autonomous cars are a major issue.”

The debate is far from over, however. Musk recently announced that he expected owners of Tesla cars to be able to earn money from them by letting them roam around autonomously during their work day, or even at night, giving people robotic taxi rides.

By way of proof that the autopilot system has its advantages, even in beta-test form, he published an email sent to him by an enthusiastic Tesla owner who claimed that the car saved the life of a careless pedestrian when it “slammed on the brakes before I could and we stopped just inches from hitting the pedestrian. I am not sure if I would have been able to stop before hitting him but I am so glad that the car did.”

‘I couldn’t afford to live in Dublin, the city of my birth’
7

I would say to anyone thinking of returning to Ireland: look beyond Dublin
10