Onus is put on owners to request fixes for emissions cheating 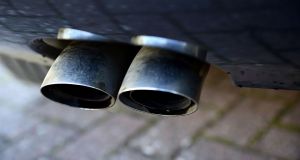 According to pressure group Transport & Environment, national ministers are planning to scupper plans by the European Commission to roll out compulsory fixes for the worst offending diesel-engined cars

There are calls for the EU to set up an independent watchdog to monitor and enforce vehicle emissions regulations across the block, as independent campaigners say nothing is being done to regulate the emissions of as many as 80 per cent of the most polluting vehicles on our roads.

According to pressure group Transport & Environment, national ministers are planning to scupper plans by the European Commission to roll out compulsory fixes for the worst offending diesel-engined cars. According to T&E, the proposals will be watered down and initiatives such as independent on-road testing may be shelved.

These moves, which according to T&E involve several key European governments, with the exceptions of France and Denmark, are to try and ensure that national motor industries are protected from significant potential expense and that jobs and investment are protected at the local level.

The documents, obtained by T&E, show that national governments are at loggerheads with their own MEPs. The environment committee of the European Parliament has voted to establish a new, independent pan-EU watchdog that, like the American Environmental Protection Agency, would have legislative powers.

Julia Poliscanova, clean vehicles and air quality manager at T&E, told The Irish Times that “this scandalous stalemate results from national governments prioritising the interests of domestic carmakers above citizens’ need to breathe clean air. Although national vehicle regulators in Europe have been captured by the car industry, the European Parliament continues to demand that carmakers will be held to account.

“There is a Mexican stand-off with governments afraid to act against their own fraudulent carmakers for fear it will put their domestic industry at a competitive disadvantage. The EU urgently needs to create an independent body, as MEPs have suggested, to check how cars perform on the road. This will ensure there is consistent enforcement of the rules and that penalties are applied when there isn’t. Transport ministers have the chance this week to show they are taking deaths from diesel cars seriously and want to fix the problem but there are few signs of that happening.”

According to T&E, of the most polluting diesel engined cars on European roads, some 20 percent are covered by the VW Group recalls following the dieselgate scandal and are currently being worked on to reduce their emissions of dangerous nitrogen oxides. That leaves, though, 80 per cent of the worst offenders for which there is currently no regulatory fix. T&E singles out Renault, Fiat, Opel and Mercedes for criticism, saying that they “are subject to voluntary recalls that will only happen if customers request the car be fixed. “

The ACEA, the umbrella group that represents the European car makers as a whole, has hit back at the accusations. Erik Jonnaert, secretary general of the ACEA said in a statement that “of course, by listening to so many stakeholders we came to better understand the potential of all innovative solutions out there, but stakeholders and studies alike also reminded us that such measures have to be realised in the most cost-effective way.

“Joining forces to reduce emissions will allow us to drive down total road transport emissions more effectively, but at the same time we will need to ensure that Europe’s strategic automotive industry remains competitive in the future,” he said.

“Europe’s automobile industry is making significant investments in low-emission technology, but these investments will not be enough if we don’t have a coherent European framework supporting this major transformation. Moreover, manufacturers have little influence over how the cars, vans, truck and buses they produce are used. For this reason, Europe should adopt an integrated strategy to tackling road transport emissions.”

Do Irish people hate babies? Our irritation with them is embedded in our culture
8