The motor sector is in rude health now, but leaving EU could have disastrous results 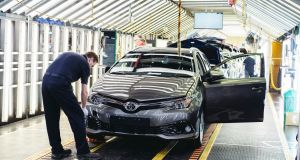 Final checks are made on an Auris at the Toyota plant in Burnaston, England: Toyota buys parts and hires workers from across the EU 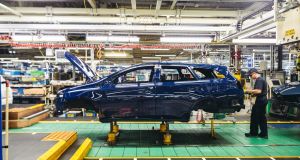 The assembly line at the Toyota plant: after Brexit, it faces the prospect of higher tariffs, a smaller labour pool and less access to the 500 million potential customers in Europe 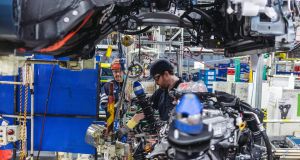 An engine is fitted on the assembly line: Toyota has options around the world if the Burnaston plant ultimately proves unprofitable

Britain’s automotive industry, once ailing and plagued by strikes, now hums with the vibrancy of a global manufacturing hub. Most of the cars made in Burnaston, models such as the Auris and Avensis, will make their way beyond British borders. Toyota buys parts and hires workers from across the European Union.

However, the level of integration, previously lauded, has made the carmakers especially vulnerable after Britain’s vote to leave the EU. If a messy divorce follows, Toyota and others face the prospect of higher tariffs, a smaller labour pool and less access to the 500 million potential customers in Europe, all of which will be negotiated in the coming months and years.

The drop in the British pound since the vote has not been much help either. Many of the carmakers’ contracts here are priced in euros, even with suppliers in the same country such as Johnson Controls, which makes seats for Toyota.

“We have made clear that if we lose some of these elements, it will make making cars in the UK less competitive,” said Anthony J. Walker, deputy managing director of Toyota Manufacturing in Britain. “We would have to reduce costs, which would be very hard.”

Toyota is particularly concerned that its just-in-time manufacturing system – which requires that parts arrive at the plant in a certain order just a few hours before assembly – should not be disrupted.

“It is absolutely suicidal,” said Peter Tsouvallaris, the plant’s senior representative for the union Unite, which also represents workers at other carmakers. “I am concerned about the long-term future of the plant because we don’t know what Brexit means.”

The British government understands the stakes for the country, which is home to a cluster of world-class plants for overseas carmakers such as Nissan, General Motors, BMW and Honda. The sector employs about 169,000 people and accounts for about 12 per cent of the value of British exports, according to the Society of Motor Manufacturers & Traders, an industry group.

Already, British prime minister Theresa May has shown a protective streak. The government has promised to invest £390 million (€465 million) to encourage advanced, low-emission vehicles, including driverless and electric cars. It has said it will continue to fund training for Toyota and other car companies, as well as encourage development in component makers based in Britain.

Britain also offered assurances to Nissan, whose plant in Sunderland became a flashpoint in the time before the vote over Brexit. Although specifics have not been made public, Nissan said in October that it would build a new version of its popular Qashqai and another model at the plant.

“The support and assurances of the UK government enabled us to make the investment decision,” Nissan’s chairman and chief executive, Carlos Ghosn, who had recently met May, said at the time. That clout has been hard won for an industry that was struggling not so long ago.

The outlook began to change in the 1980s, as Japanese carmakers began to look for a foothold in Europe to gain access to the single market. Britain beckoned. Under prime minister Margaret Thatcher, it was increasingly welcoming to foreign investment, unions were in retreat and Britain’s own car industry was not much of a competitive threat.

Toyota came in the early 1990s, finding a large site in central England that could be cleared and built to the company’s specifications. The Japanese companies brought efficient production methods. The nearby industrial centre of Derby welcomed the new manufacturing jobs at a time when jobs at other companies were being lost.

“The Japanese completely reversed what was going on,” said Garel Rhys, a professor emeritus of motor industry economics at Cardiff University. “They showed that Britain was not a place that was out of control.”

Other companies soon followed their Japanese rivals. In the early 2000s, BMW of Germany began building a new line of Mini cars in Oxford. Later that decade, Tata of India took over the old British brands Jaguar and Land Rover. It has helped grease Britain’s economy.

Overall, the country made about 1.6 million cars last year. The figure, though much smaller than in powerhouses such as the United States and Japan, leaves it roughly level with France as Europe’s third-biggest carmaker, Germany and Spain being first and second.

Toyota has invested £2.2 billion in the Burnaston operation and an engine plant in Wales. Together, they employ around 3,200 people. Britain remains a heavyweight for Toyota, producing about 30 per cent of the company’s cars in the region.

The spectrum of possibilities is broad, from Britain remaining part of the single market to the country facing high barriers to trade with the continent. Both sides have their own competing interests with carmakers, putting the industry in the middle of a potential fraught negotiation.

“The car industry really did take the prospectus of the EU at face value,” said Stephen Adams, a partner at Global Counsel, a political risk firm in London. “It relies on the free circulation of goods in the EU not just to sell products but to make products.”

Toyota has options if the Burnaston plant ultimately proves unprofitable. The carmaker has more than 30 vehicle manufacturing plants around the world and, like many of its rivals, pits them against each other to bid for the right to make various models. Toyota also has a string of plants across the region, including large car-making hubs in France and Turkey.

Walker, the Toyota executive, said a new model for Burnaston was under consideration, although no decision had been made. The plant has already handled several changes to models in its history.

On display in the reception area is the Avensis, versions of which are exported to Japan. “This is the only plant in the world that sends cars back to Japan,” Walker said. “We are very proud of that.”

Who is responsible for repairing a dangerous boundary wall?
2

Suffering from Covid-19 beard? Here’s how to tame it
7

As lockdown begins to lift, once again I feel like a trapped bird
9

Full-time caring: My husband had to become my carer
10