This powerful, racy BMW hits the sweet spot between performance and refinement 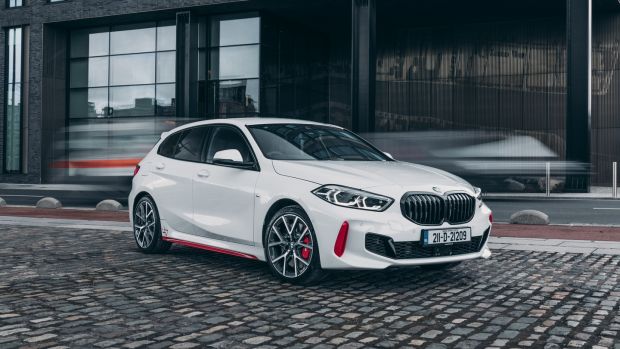 BMW 128Ti: Gets the mix of performance and refinement just right

My colleague Neil Briscoe writes this week about how he has been wowed by the Morgan Plus Four, but at its heart is arguably the real star: BMW’s sweet two-litre turbocharged petrol engine. It’s the same powertrain that features in one of the big surprises from the Bavarian brand.

As BMW announced its full-frontal assault on the electric car market, with the new i4 and IX landing in Ireland in November, I’ve spent the past fortnight driving two old-school petrol powerhouses.

The first was the latest-generation M3, a car engineered for the track but more likely to spend its days growling in traffic and roaring away from the lights in the wealthiest suburbs of the US and Asia.

The M3 is a beast, and still a massive showstopper. Driving it is a bit like being in a celebrity’s entourage. And just like with celebrities, this car attracts adulation and ire in equal measure. The latter is certainly driven by envy, but a growing minority also see it as a bit of a dinosaur. There’s a sense that the sun is starting to set on the heavily spoiler-clad, burbling muscle cars.

Arguably it was not the advent of modern electric cars that undermined the allure of cars such as the M3 so much as the onset of some truly phenomenal hot hatches many years ago. The majestic trait of the E30 M3 of the 1980s was its light-touch ability to flit about at phenomenal pace. It was athletic.

Over time, as a plethora of GTis and their ilk got faster, they came to dominate this segment of the performance market, encouraging engineers of fast-paced saloons to add more muscle and racetrack traits with every generation. The end result was a fleet of heavy, track-ready cars that were over-engineered for everyday motoring and carrying a price tag the rubbed up against the supercars.

This latest M3, for example, starts at €128,000 but throw in a few optional extras and the price starts to rocket. Fancy a pair of sculpted carbon-fibre bucket seats? That will be €5,870 please. Dress the outside in some more of that carbon fibre, including a rear spoiler barely wider than your thumb? Well, that’s another €7,080.

Our admittedly gorgeous test car in Isle of Man green came fully dressed with a final price tag of more than €146,000. You might get 510bhp in M3 Competition guise in a car that hit 100km/h from a standing start in just 3.8 seconds, but that’s a lot of cash. And for some perspective on how far we’ve come, Kia claims the upcoming GT version of its new all-electric EV6 will clock a time of 3.5 seconds to 100km/h.

In my Lotto garage, there will always be a place for a BMW M5 Touring, the ultimate stealth performance car. However, the M3 lost its place several years ago to the much more amenable and fun M2. The latest generation hasn’t won the Lotto garage spot back.

These are outright performance cars clad in the image of more mainstream models. However, for those who wish to bridge the gap between performance and everday fun on a more realistic budget, the GTi sector is still the first port of call.

And for the first time in a while BMW has delivered a car that seems to sit in that sweet spot: the 128ti.

Unlike the fully fledged M Division offerings, this car doesn’t offer you the option of a dozen different ways to set up the suspension and steering. What’s more, it is front-wheel drive – anathema to the M purists.

But what it does is prove that by trusting in BMW’s engineers to get the set-up right, you get a car that can properly claim to be a truly entertaining driving machine. More than that, it’s a car that can rightly claim the hot hatch crown from the VW Golf GTi.

A front-wheel drive Golf GTi rival from BMW may seem like something of a surprise, but the Germans have banked years of engineering nous from its ownership of Mini.

The two-litre four-cylinder engine puts out 261bhp, matches to a low-ratio eight-speed automatic transmission, delivering punchy acceleration to the front wheels. There’s no manual version on offer, but this transmission is so impressive it’s not missed. Performance feels a lot quicker than the official 0-100km/h time of 6.1 seconds suggests, while a fuel economy of more than 6.4-litres/100km (44mpg) is achievable unless you are pushing it hard.

But it’s the handling and poise that make this car a star. The power hits the tarmac in a way that puts a smile on your face. It’s not the manic ride of an M car. Nor is it as giddy as rivals such as the Ford Focus RS or Honda Civic Type R, but it’s the better for that.

Some real magic is at work up front in the way BMW delivers power to the front wheels without ending up with jumpy torque steer. It’s more down to computer programmers than mechanical engineers, but the system works a dream.

It cruises comfortably on motorway stretches, but it’s at its best on Ireland’s country roads, where its proportions and power are better suited to the narrower, more twisting conditions than rivals packing more horsepower punch.

Inside you get a car that has all the refinement of the larger BMW set, a mix of buttons and touchscreen, all dressed in smart attire. There’s nothing garish in here, nor are there €6,000 bucket seats.

Against a backdrop of an electric conversion and M Divisions increasingly over-engineered offerings, the 128ti proves that BMW still has some incredible engineering prowess in its ranks. Simply tasked with building a car that could win the hot hatch race, they proved their worth.

The 128ti is powerful, subtle, refined and racy. It’s the sweet spot between performance and refinement. It asks little of the driver but offers up plenty in return.

If you want more raw power and pure manic fun on a €50,000 budget, then your best buy at present remains the Toyota GR Yaris. If you want that sweet mix of performance and refinement delivered by the hot hatch brigade, then the 128ti has all you need.