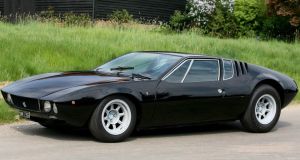 The De Tomaso Mangusta, one of the brand’s most iconic cars

Iconic Italian supercar brand De Tomaso has been bought out of bankruptcy for just over €1 million by a Hong Kong investment fund.

The brand that created the iconic Mangusta and Pantera models will now desert Italy to build cars in China.

The sale leaves the city of Torino in a precarious position, as it has been left with the dormant factory and is responsible for the 800 workers who are almost certain to be made redundant.

The new owners, Ideal Team Ventures, won De Tomaso in an auction handled by a bankruptcy judge in Torino and has already met the deadline to pay the €1.05 million winning bid.

“Ideal Team Ventures does not plan to produce cars in Torino,” the Fiom-CGIL union’s Torino secretary, Federico Bellono, said. “It has said it plans to build in China under the De Tomaso brand instead.”

While the sale is not yet finalised, it is only awaiting notarisation, which is effectively a rubber stamp-style checking of details.

Argentinian racer Alejandro de Tomaso founded the brand in 1959 and began an industrial empire based in Modena. De Tomaso owned Maserati from 1976 until 1993, Moto Guzzi from 1973 to 2000, and also owned the maker of the world’s first hatchback, Innocenti, the design houses Ghia and Vignale and motorcycle maker Benelli.

It also had its own Formula One team from 1961 to 1963, then built a Dallara-designed chassis for a young Frank Williams to enter in the 1970 World Championship. Piers Courage died in it during the Dutch Grand Prix and for the rest of the season Brian Redman and Australian Tim Schenken shared the driving duties.

But De Tomaso fell upon hard times after its founder’s stroke in 1993 and its last car, the Guara, was built only fitfully. There were plans to build SUVs with Russian carmaker UAZ in southern Italy, but the planned 10,000 cars a year never came and the family closed the doors in 2004.

The trademark was sold by court-appointed liquidators in 2009 to Italian Gian Mario Rossignolo, who negotiated significant local and federal Italian government assistance to fulfil a plan for 3,000 crossovers, 3,000 limousines and 2,000 coupes a year. The new company, De Tomaso Automobili SpA, was to have built the chassis and bodies in Livorno and assembled the cars in the old Pininfarina plant of Grugliasco, just outside Torino.

Rossignolo’s De Tomaso even showed a concept car, called the Deauville, at the 2011 Geneva Motor Show, but it was sold again in May 2012 and Rossignolo was arrested in the same year for misusing €7.5 million of government money.

The original De Tomaso factory still stands on the outskirts of Modena (as does the EB110-era Bugatti factory) and the family still owns the city’s historic Hotel Canal Grande.