Michelle: ‘Life is much better in the US for divorced women’

After six years of a ‘draining’ divorce process in Ireland, one woman moved to US 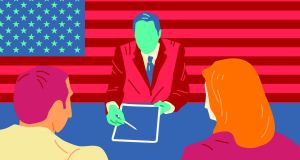 The American Way: “What I’ve learned in the US is that divorce can be streamlined and it doesn’t have to erode the family,” says Michelle.

Michelle, in her 40s with children, struggled for six years through the Irish divorce process and eventually moved to the US for resolution.

“My 10-year marriage began to break down when my husband left Ireland for work in the US. He became increasingly distant and uncommunicative. I filed for separation when I could not tolerate it any more.

“The whole process was absolutely draining – the back and forth between his lawyer and mine was non-stop, meetings scheduled and then cancelled. My ex wouldn’t have cared how long it dragged on.

“The fact that you have to be legally separated for four years really affected me. I was advised to take up residence in the US, where I would have legal access to my ex’s property.

“In the US state where I divorced, divorce cannot take more than 18 months . . . If the family law judge has not sorted it by then, he or she is called to the Superior Court to explain. It should be like this in Ireland because the longer the situation goes on unresolved, the more bitter people get. What I’ve learned in the US is that divorce can be streamlined and it doesn’t have to erode the family.

“I felt a stigma as a separated woman in Ireland. In the US, most people I know are on at least their second marriage. I can’t believe I stuck it out for 13 years in Ireland.”

In conversation with Kate Holmquist. Michelle’s name has been changed