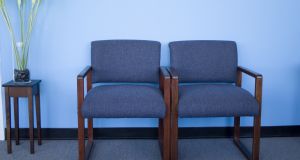 Last week my lungs were congested, so I went to the doctor. The dispensary has a bright waiting room and an office for the receptionist. There are two rooms down the corridor where the doctors sit behind clean desks with their laptops and stethoscopes at the ready, and their desks stacked with folders of intimate notes about patients’ bodily functions.

I sat in the corner of the waiting room, facing two other invalids opposite me. One was an elderly man with shaking hands, thick glasses and a chalk-white face. He was a bloodless old fellow, like someone who had long since renounced the pleasures of the world and retired to the solitude of his psyche to become more spirit than flesh, a kind of living abstraction.

The other invalid was a little woman with a red face. She had a tissue the size of a small towel on her lap, which she moved from hand to hand and, when necessary, to her nose.

A talk show was in full swing on the wireless that sat on a ledge outside the secretary’s office.

The radio is an important device in any doctor’s surgery. It keeps people who might know each other from falling into idle chat about their private ailments, because in rural Ireland the body is an isolated universe. And the radio also creates a kind of serenity in the waiting room akin to a singing deacon in a church.

The radio presenter was talking to a sex therapist and reading out problems that listeners had texted or mailed in.

Someone in their 60s who had been having sex four or five times a week until recently was experiencing a downturn and was worried that once a week was an unnaturally low performance level.

The presenter asked the therapist: “What should he do?”

I tried to keep a straight face by distracting myself with other thoughts. I tried to think of thrushes that had arrived in the garden that morning and were feeding under the trees.

But I couldn’t resist looking at the old man opposite me. For all I knew he may have had a wonderful sex life. He may have performed for years on a daily basis with sudden grace, endlessly surprising his beloved like a little hawk that swoops with elegance on his little hen. But there was certainly no trace of any such adventures left in his body now.

The therapist on the radio was explaining that sometimes orgasms can be hard to achieve and that sometimes sexual pleasure is about more than just an orgasm. This caused the little fat lady to sneeze a huge cloud of wet germs into her handkerchief and, in the aftermath of devastating chest movements, she coughed up phlegm that her handkerchief swallowed as it emerged from her mouth.

“Does it take him longer than normal to ejaculate?” the therapist asked. “It may simply be an issue of ageing.”

I looked at the old woman and the man opposite me and wondered when was the last time either of them had been on fire with desire. Which drew me into a small but pleasant remembrance of my own most recent orgasm a few days previously. And it occurred to me that everyone in the world must eventually arrive at what turns out to be the last orgasm.

“Does he wear glasses?” the therapist on the wireless wanted to know. It sounded like an accusation, and I was slightly relieved I had left my glasses in the car.

The little lady smiled across the room at me as if we were all children listening to a fairy tale, and I was glad when the secretary called my name. I went down the corridor to the surgery, where the doctor listened to my lungs and concluded that I had an infection and needed antibiotics.

So off I went to the pharmacy, where I handed in the prescription and waited for a young lady in a white coat to fill it out.

I was waiting just beside the counter, hovering over a display of men’s toiletries: moisturisers, talcum powders and deodorants. And there before me, within reach of my fingers, was a full shelf of condoms. Packages of three, six or 12. Normal, safe or strong. And even condoms architecturally designed for extra pleasure, according to the labels.

Eventually the chemist gave me my little bottle of red and white Amoxicillin capsules, and I went home and took to the bed with a Lemsip and the nostalgic sounds of Chopin’s piano music oozing from the big speakers beneath the bed.