Alcoholic fruit bombs have given way to far more subtle, elegant wines and for the canny buyer Spain may offer better value than any other country 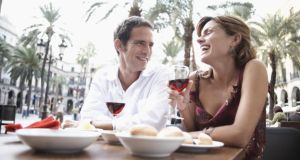 Wine consumption is down by 20 per cent in Spain

When it comes to tales of economic woe, the Spanish are right up there with us. Spain is going through a crisis similar to our own; the same austerity, the same plummeting house prices and a terrible unemployment rate. As in Ireland some groups have been worse affected than others. It has certainly had a marked effect on the wine business, although not always in a negative way. Most producers I have talked to say that internal consumption has dropped by 20 per cent or more. Those relying on the home market have faced serous difficulties. But the more innovative have looked abroad where they have found no shortage of willing customers.

It helps that Spain is now producing some wonderful wines, but five years ago the better wines were often very expensive, supported largely by the buoyant home market. Prices today are far more realistic and compete favourably on the international scene. For the canny buyer, I believe Spain may offer better value than any other country at the moment.

In this country, Spanish wine is enjoying something of a boom, boasting almost 15 per cent of the total market. This is up from 5.5 per cent a decade ago according to the Spanish Commercial Office. Much of this is made up by Rioja, still by far the most important part of Spanish wine exports everywhere.

Behind Rioja comes Ribera del Duero another region that has succeeded in gaining international recognition, and of course, the Catalan firm of Torres has always been hugely successful on the export market. I have no beef with these three market leaders but nowadays the real excitement in Spain is happening elsewhere. Virtually every wine region now offers its own unique wines made with local grape varieties, a very welcome change from the Cabernet/Merlot/Syrah that were all the rage a decade ago. Now there is a real pride and belief in local traditions. The other big change has been one of style. Not too long ago, to succeed your wine needed to be an alcoholic fruit-bomb, low in acid, with masses of spicy new oak. These days you will find far more subtle elegant wines.

The revolution has not been confined to red wines. Over the last decade we have become familiar with the fresh white wines of Rueda and Rías Baixas but more recently two other parts of Galicia, Valdeorras and Ribeiro, have been making real strides in quality. Instead of the Verdejo of Rueda, and Albariño of Rías Baixas, we now have to learn to get our tongues around Godello, Treixadura and Louriera – a lot easier to drink than pronounce. Over to the east and the smaller growers of Penedes in Cataluña are starting to produce their own wine rather than supply the two giants of Cava, Fraxinella and Codorníu. Not only is the selection increasing, but overall quality is higher than ever.

Tempranillo may still rule as Spain’s greatest red grape, but we can now access plenty of other wines made from hitherto unheard of varieties. In Alicante and Murcia, producers are starting to master Monastrell (aka Mourvédre in France) and offer increasingly sophisticated wines. Bierzo and parts of Galicia have some deliciously fragrant toothsome reds based on Mencía. Returning to the east coast, Utiel-Requena and Valencia have rediscovered the delights of their local speciality, Bobal, and Cataluña and the northeast of Spain are making better and better wines using Garnacha and Cariñena. Lastly we should not forget Palomino, the grape used to produce Sherry, the greatest Spanish wine of all. It all makes for an exciting heady mix, and with prices better than ever, now is the time to indulge in Spanish wine.

This week, I try four uniquely Spanish wines. Until recently I tried to avoid Cava; too many bad memories from parties in my early 20s. But over the last year I have tasted several very good wines, including the Maria Casanova below. This made from the local trio of grape varieties, Xarello, Macabeo and Parellada. Alfredo Maestro is based in the highly fashionable Ribeira del Duero region. But, frustrated by the regulations and annoyed by the highly manipulated wines of the area, he decided to make natural sulphur-free wines, under the lowly Castilla y Léon appellation. The Dominio de Tares from Bierzo uses Mencía to make a series of impressive wines, and lastly Crash is made, according to the producers website from the desire to be innovative, daring and optimistic in difficult economic times. We can all drink to that.

Over-competition in sport is bad for children’s mental health

Ask the Expert: My teenage daughter doesn’t talk to me