If Moneygall can throw in a bouncy Barack Obama, we’re there 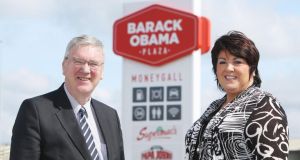 Barack Obama Plaza. It resonates. It echoes through the ages. It smells of Supermac’s. There is a kind of genius behind the motorway service station off the M7 at Moneygall. Its name alone is a brazen leap into the ludicrous, in part because they’ve appropriated the name of a US president when it will largely be spoken as a promise to the swollen-bladdered.

“Just hold on. You can wee at Barack Obama.”

It’s also because they’ve built a plaza in a country that has never done plazas, never seen the need for them. Even in the US, plazas became a way of disguising shopping centres behind highfalutin nomenclature.

When you hear Barack Obama Plaza you’re less likely to think of a truck’s exhaust belching at you on your dash across a rain-whipped forecourt in the desperate hope of getting your three-year-old to the toilet before she explodes.

(In early reporting of the project, there was talk of statues of Barack and Michelle Obama. I’m not sure that’s made it to the construction phase, but it would be wonderful if, frozen in bronze, was an image of them stretching their limbs comically as they stepped off a coach trip to Limerick.)

As many have observed during the week, Barack Obama Plaza will also be a striplit reminder of Ireland’s ability to add new layers to its own twinkly-eyed pot o’ gold at the end of every rainbow stereotype. It will be a memorial to the week when Moneygall hit the jackpot by fulfilling Ireland’s half-crazed desparation to claim the US president as one of its own, and then milk it for as long as possible. And then a little on top.

That instinct could have bubbled up anywhere – there is already an Obama cafe in Moneygall and a tourist walk with Obama-related stuff on it – it just happened to be in the naming of a fancy petrol station. Although naming a petrol station after a US president is, perhaps, in fact a sly commentary on that country’s unhealthy reliance on oil and its motivation behind many questionable and bloody military ventures.

Scratch that. It’s not.

Yet, for all that Barack Obama Plaza causes the average person to raise their eyebrows until they pop off, there remains some very smart thinking here. Through a name aimed at cocking the ear of every passing American tourist, and through its attendant Barack Obama Community Facility, they are selling it as a stop in its own right.

You can be sure that, in its early days after opening, people will be heading there for a gawk at the “museum” items relating to Obama. They won’t be their way to anywhere else, nor on their way back. They will be treating a motorway service station as a destination in itself.

They won’t be the first.

The closest motorway service station to where I live is a big, clean, warm spot that serves coffee in cups bigger than the average people carrier. It is called Applegreen, a neat doubling up on the mental associations of the fruit that bamboozles you into ignoring the fierce artificiality of the place.

It has a a play area. Climbing frame. Soft floor. Mini versions of those monstrous play centres you see in warehouses across the country. It has amusements that no one ever seems to put money into but that kids buzz around like wasps at a jam sandwich.

And, always, there are parents there. Drinking buckets of coffee, reading the paper or flicking their phones, occasionally looking up to make sure their child hasn’t wandered on to the motorway.

It’s a rainy-day destination. Kids love it. Parents get a few minutes’ peace against the white noise of cars haring past just a hundred metres away.

It sounds like the kind of thing people should add to the vision of an atomised society, the gutting of community. But it has a slide. Sometimes that’s all that matters.

I suspect there are others who go there, just for the drive, for something to do, an unspoken demographic who from early on subverted the idea that you passed through a service station instead of going to it. At Barack Obama Plaza, that notion has finally been brought out into the open. If they could just throw in a bouncy Obama for the kids to jump on, it would be a strange sort of perfection. @shanehegarty shegarty@irishtimes.com