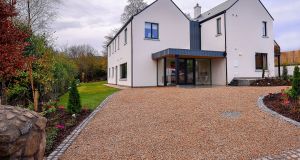 Hillside in Rathmichael: one of the few new schemes which has launched in the area

David Hall, Waterford native and former chief executive of Digicel Jamaica, is planning yet another large-scale property development in Rathmichael, south Co Dublin. Last year the Jamaica-based businessman applied to demolish Wyndhurst, Falls Road, a 223sq m house on 2.97 acres, and to replace it with 50 apartments in four blocks.

Next door, developer New Generation Homes shortly followed suit by purchasing another house in hopes of developing it as a small housing development.

Both Hall and New Generation failed in their attempts to secure planning on the road as planners rejected the schemes.

Seemingly unfazed by the rejection of his Falls Road plans, Hall is soldiering on and is now seeking planning permission to develop 42 properties on a vacant 3.21-acre site nearby on Ballybride Road, directly across from the entrance of the upmarket Ballybride estate, and bounded by the M50 to the east. 25 houses are envisaged for the site, in addition to 16 apartments.

The 16 four-bedroom and nine three-bedroom houses would vary from two to three storeys in height. Two three-storey apartment blocks comprising 12 two-bedroom and four one-bedroom units in total would complete the scheme.

Only time will tell if Hall will succeed this time around in securing planning. However, only one new scheme, Hillfield by New Generation Homes, has launched in the area lately as planners continue to deny permission for practically every proposed development.

In recent months, two other major schemes were also rejected in addition to the aforementioned Falls Road proposals. Rathgar duo Gregory and Shane McCambridge, who own a whopping 33.2 acres in the exclusive Old Rathmichael cul-de-sac, were turned down when they applied for planning for 11 large executive homes on a small portion of their site.

Elsewhere, on Ferndale Road, Cavan-based Charton Homes failed to secure planning permission for 50 houses on the 7.54-acre grounds of Shankill House following opposition from parties such as An Taisce and TD Mary Mitchell O’Connor.