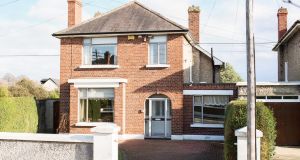 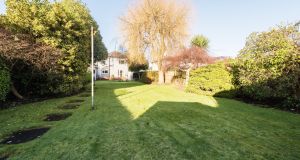 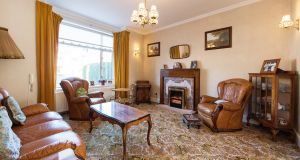 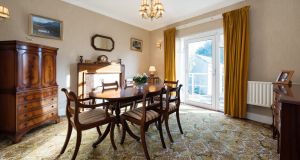 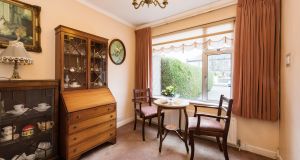 A quiet house with sunny rooms and an air of gentle expectancy about it, number 22 Seafield Avenue was the family home of Val and Peggy Lanigan. Val, who founded Lanigan Funeral Directors in 1972, bought number 22 in December of that year for £10,500. This was considerably more than the £920 paid by the first owner in 1934. Builder Joseph McGonagle, just a year earlier, had built 20 houses on the east side of Seafield Avenue.

Val Lanigan, his daughter Corah says, cared for the garden with a passion that came second only to the business. He died last year, aged 91, but a rolling green lawn, with holly and willow trees, high hedging, ivy and daffodils coming into bloom, are testimony to the years of care he put into a rear garden of some 1.8 acres. With Greenlanes National School and playing fields on the other side of the wall, the garden is not, and will not be, overlooked.

The house is detached and has a floor area of 145sq m (1,560.7sq ft) divided into four bedrooms, three reception rooms, a kitchen/ breakfastroom and a family bathroom. Agent Douglas Newman Good is looking after the executor, private treaty sale, with an asking price of €795,000.

It is well cared-for, bright, solidly traditional in both decor and layout, and a new owner would likely want to make changes to number 22. There is scope to extend to the rear, subject to planning permission. Most of the original features are intact – notably internal doors with high handles, and a pair of fine fireplaces in the reception rooms.

The main reception rooms, running from front to rear, have sliding doors between; those Art Deco-style timber-surround fireplaces; a wide box window to the front, and French doors to the patio at the rear.

Across the hallway, another bright space, there is a study/TV room with a large picture window over the front garden. The kitchen has a window over the rear garden, corner nook for a dining table – and is probably where a new owner will want to make changes.

The two largest of the four bedrooms have built-in wardrobes and vanity units with wash hand basins.

The rear of these has especially fine views over gardens and treetops. The family bathroom has a shower and a window giving natural light.

There are a couple of sturdy, cement sheds in the rear garden, both with lots of storage and one with an outside WC and wash hand basin.

Expert tips: A dentist on how to have perfect teeth
7