Built in 1996, Giverny enjoys perfect seclusion and permission for another three-bed house on its 1.25 acre grounds

Take a look through Givery, a south county Dublin home, on the market for €3.25m, that offers picture perfect views of Killiney Hill. 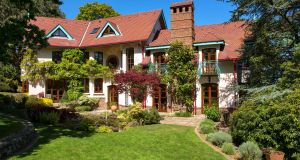 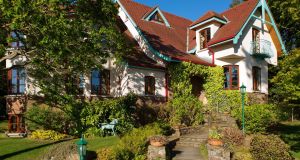 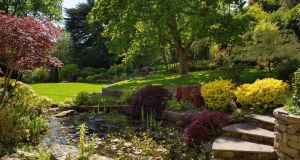 Excellent sea views and beautiful  gardens are two of the chief attractions of a large detached house on Marino Avenue East in Killiney, Co Dublin. And though it looks as though it has been there forever, Giverny, a 475sq m (5,100sq ft) detached four-bed house laid out over four levels was designed by architect Paul Brazil in 1996.

It briefly hit the market last autumn, with a price tag of  €3.45 million. Now it has been officially launched for sale through Sherry FitzGerald seeking €3.25 million. The property also comes with full planning permission for a detached 291sq m (3,132sq ft) three-bed house designed by Paul Brazil on the 1.25-acre grounds.

The owners say they wanted Brazil to maximise light and sea views from their house, which is built on a sloping site. The architect did just that, creating an unusually-shaped house where many rooms are triple aspect, offering  views of Sorrento Terrace, Dalkey Island and Killiney Bay as well as of Killiney Hill and its own back garden. The red-roofed house with Juliet balconies, built only 22 years ago, feels older, nestled as it is in the middle of mature trees that were on the site when the couple bought it.

They lived in Paris for 11 years, naming their house Giverny after painter Claude Monet’s village – they loved visiting his famous house and garden in Normandy. They also imported parquet floors for the drawingroom, study and main bedroom and pink-tinged beige stone-flooring for the kitchen from France.

Its location is both very private, at the end of Marino Avenue East, and convenient: it’s just a few minutes’ walk down a pedestrian lane from its front gates to Killiney Dart station.  It’s a pretty exclusive address, a private road according to a sign at the avenue’s entrance off Military Road, across the road from Holy Child girls’ secondary school. One house the road sold in 2016 for €2.825 million, and Pantiles, next to Giverny, is for sale for €2.5 million.

The front door opens into a double-height entrance hall with a central staircase to the upper levels, and French windows to the back garden. A number of rooms radiate off the hall. On the left, double doors open into the parquet-floored drawingroom, with bay windows at the front and side, an open, marble fireplace and French windows opening into the garden. It features bookshelves, like nearly all the rooms in the house.

A family room off the other side of the hall has more views across Killiney Bay to Dalkey island. There’s a bathroom off it and it could easily be fitted out as an en suite bedroom by new owners.

The kitchen/breakfastroom is up a few steps from the hall. It’s a pre-Celtic Tiger era kitchen, with lots of timber rather than the sleek, shiny units generally associated with the early noughties. The kitchen has oak units, a red Aga and a tiled countertop. The kitchen’s work area is small, but conveniently U-shaped. The long, wide breakfastroom has an open fireplace with a raised hearth and brick surround. Wide French windows open out to the rear patio.

Upstairs, a very large room is used as a study but it could be another reception room. Parquet-floored like the drawingroom below, it has windows on three sides, with a wide window seat in the bay at the end and two French windows opening out to Juliet balconies overlooking the rear garden.

The main bedroom to the front of the house has French windows that open out to another Juliet balcony. It is en suite, with a large bathroom that hosts a clawfoot bath and shower off one side of the bedroom, and a large walk-in wardrobe off the other. There’s a separate family bathroom on this floor, as well as another on the top floor, and a guest toilet off the downstairs porch.

All the bedrooms are doubles – there is one more on this floor, and two more under-eaves bedrooms up more stairs at the top of the house.

There are more rooms in the basement, one used as a gym and the others mainly for storage, with plenty of potential to be repurposed as separate living quarters.

The back garden is beautifully designed, with patio areas, raised lawns, two ponds, one spilling into the other, which are home – on-and-off – to two or three ducks. Mature oaks, maples, a wedding cake tree, rhododendrons, azaleas and more fill the grounds. There are two large garages as well as plenty of room for parking in the driveway.

The site where a new house could be built is to the left of Giverny, in a spot that would have similar views of Killiney Bay.

‘My mother is a controlling, manipulative, narcissistic person'
6