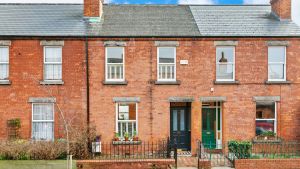 When it comes to the capital city’s southside inner suburbs, Dublin 8 is often its most affordable, save for the Portobello and Harrington Street areas. The rule of thumb has been that the further west you go within the post code, the lower the prices. That doesn’t appear to be the case anymore. Take Sandford Avenue, off Donore Avenue for example. Here, eight of its redbrick properties have acquired new owners since the Property Price Register was set up in 2010, with number 21 now coming to the market for the second time in a decade. Its owners paid €282,400 for the three-bedroom house at the bottom of the market in 2011.

The couple have carried out a full upgrade of the property, rewiring it, adding insulation and installing new timber sash windows to bring its BER rating up to a decent C3.

They also opened up the two reception rooms to give interconnecting spaces structurally kept in place by a rolled steel joist (RSJ) beam. The two rooms have open hearths with sister and brother stone fireplaces and vintage tiled hearths that tonally work well with the tiled insets. It is now in turn-key condition.

The couple kept the original timber floorboards, sanding them down and applying a dark stain to the hall and reception rooms and replacing any broken boards with timbers salvaged from a church.

There is a family bathroom and one of three double bedrooms on the return. The bathroom has a separate, freestanding tub, found at nearby Mac’s Salvage and large shower stall that has disco-like mirrored mosaic tiling. On the first floor is another double with the main bedroom spanning the width of the house to the front. There are plantation-style shutters on all the windows.

The property also benefits from an attic conversion which was done 2½ years ago. The owners got planning to install a dormer window which makes the space feel really roomy. Extending to 16sq m (180sq ft) there are views of the Dublin mountains from here.

The garden is southeast facing and has pedestrian rear access. The parking is on-street.

The owners are staying in the area and hoping to start anew on another fixer-upper. The property is seeking €650,000 through agents Felicity Fox. Recent sales within that price bracket in this part of Dublin 8 include 43 St Alban’s Road, a two-bed villa-style property a few streets away from Sandford Ave, which sold for €663,000 last January and number 19 Ebenezer Terrace, which sold for €400,000 in July 2019 and then again last January for €675,000, according to the Property Price Register.