Dalkey secret spot with added space and light for €695,000 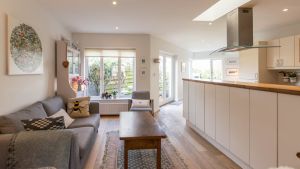 St Begnet’s Villas is a secret little spot in the village of Dalkey. The former council estate is now occupied by young families, which is evident from the young children playing along the roads after school. And what makes it really special is its proximity to the village – about a three minute walk.

Number 104 is home to a young family who purchased the house in 2008, when it was an “awful heap”. They immediately engaged architect Michael Lamb to design a ground-floor extension, which added a new kitchen, living room and dining area.

With the arrival of new babies, the couple again extended in 2013, this time adding an extension to the upper floor giving two additional bedrooms – bringing the total number of bedrooms to four – and a good sized family bathroom.

The house now extends to a more generous 131sq m (1,410sq ft) over the two floors. The fact that the house is double fronted allows for a small office – used currently as a playroom – on one side of the hallway, while at the other is a great family room that leads right into the extension. The rooms are divided by glazed doors, which allow plenty of light through while also allowing privacy when required.

While the extension took space from the garden the house backs onto the playing fields of Cuala GAA Club and Dalkey United, and can be accessed via a laneway two doors away, so there is an abundance of green space for children to play.

All the usual renovations such as rewiring and replumbing have been completed, and the only thing new residents may want to do is replace the doors on the kitchen units as they are a bit jaded.

Lovely wide plank oak has been used in the brightly-lit extension downstairs, and the principal bedroom upstairs, which has a great view of the playing fields, benefits from an en suite and small dressing area.

The family – now with four children – are moving to a larger home, and have placed their home on the market through DNG seeking €695,000.