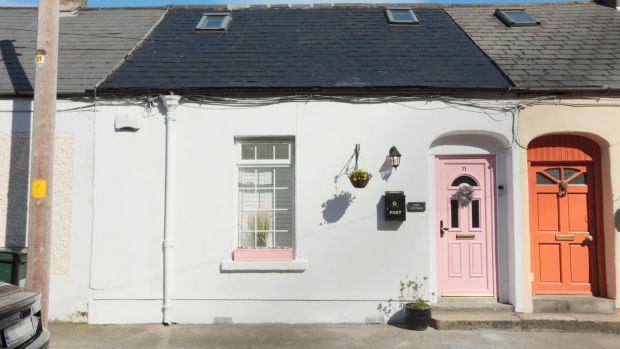 East Wall is a part of Dublin 3 that has seen a lot of activity recently and where prices have risen steeply over the past five years. Number 11 Church Street East, located just off East Road, is an example of a mid-terrace cottage that has been smartly upgraded by its owners to maximise every square centimetre of its 83sq m (893sq ft) size.

With one half of its owner couple hailing from Co Donegal, they were keen to give the house a cottagecore sensibility, despite its city-centre location. Both work in tech and so scribbled out their layout and colour ideas on their iPads before getting down to work.

The property’s original cottage doors have been retained, the floors have been upgraded, and the heating system has been given a new boiler. The installation of new windows and insulation, meanwhile, has brought the house from an F BER rating to a respectable C3.

The property opens from the street into a smartly-tiled hall where the ceiling height is more than 3m (9.8ft). Off it is the living room, where the walls are painted in Farrow & Ball’s Hague Blue. To the front, a railway sleeper has been used as a mantle over the stove, which is fitting given the house’s close proximity to the commuter and Dart train lines, and the Docklands rail station which is just around the corner.

To its rear is the first of the cottage’s two double bedrooms. The use of a large mirror leaning against the wall here helps to reflect light in and makes a strong style statement.

The eat-in kitchen is where the country look is most apparent. An induction range was one of the couple’s proudest purchases. The Donegal half of the couple grew up with an Aga in her home and describes their Church Street appliance as their “starter home version of it”. The kitchen’s cabinetry is laid out in an L-shape with D-ring handles and leaves plenty of room for the table, which gets westerly light. The back door leading out to the rear is also on this side. Laid out in artificial grass, the garden is northeast facing.

Upstairs there is a double bedroom and a smart, newly-renovated bathroom that is set under the eaves, with rooflights bringing in light but giving plenty of privacy. The second bedroom is to the back.

By cleverly hiving out the volume in the roof above, the couple has managed to install a home office at the top of the house where there is also an attic room that can be used as a second office or for guests when they come to stay.

The couple paid €280,000 for the cottage in August 2016, according to the property price register. Now renovated, number 11 Church Street East is seeking €420,000 through agents Auctioneera.