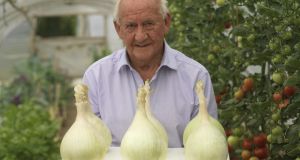 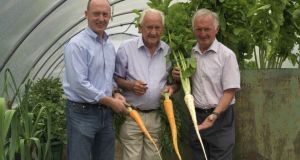 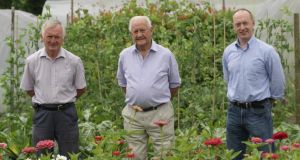 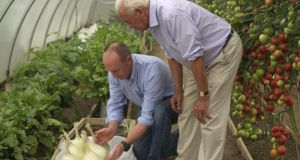 While I’m not sure why it should be so, I think it would be fair to say that champion vegetable growing has traditionally been a peculiarly male pursuit. I’ve yet to meet a woman gardener who has tried to grow a carrot as tall as herself, or a marrow of such vast size and heft that it would just about squeeze into the boot of a small car.

But before I’m accused of horticultural stereotyping, let me swiftly refer you to the website of the European Giant Vegetable Growers Association, (egvga.com) whose meticulously compiled scoreboard confirms that it’s mostly men who hold the world records for growing the goliaths of the vegetable world.

Ireland has its very own merry band of (predominantly male) champion vegetable growers, who exhibit/compete at many summer horticultural shows across the country, the largest of which is the annual Tullamore Show. Amongst these seasoned competitors are three generations of a distinguished Co Laois horticultural family that includes champion grower Colin Lawlor, his champion-grower father Martin, and Martin’s father, the remarkable gardener, nurseryman and paterfamilias, Harold Lawlor, aka ‘the Boss’.

Charming, dapper 91-year-old Harold, a man more sprightly than many half his age, has been winning prizes at horticultural shows since he was a young boy. He can tell you, for example, where to get the very best exhibition-quality seed – “definitely Medwyns of Anglesea” or where to source competition-winning leek and onion plug plants- “Vin Throup in Yorkshire”– as well as which varieties are most likely to be prizewinning. “It’s got to be Medwyn’s selection of ‘Long Red Intermediate’ if you want long carrots, but otherwise ‘Sweet Candle’, ‘Victoria’ for champion-sized parsnips, ‘Rooster’ and ‘Bluebell’ for potatoes, and ‘Zenith’ for a very good-looking tomato.”

Varieties aside, he’ll also tell you that you need good ground, good seed, good plant husbandry skills, good attention to detail and a generous helping of good luck in order to have a chance of bagging an award.

If you’ve ever stopped to wonder what other tricks champion vegetable growers have up their sleeves, Harold – a former judge at horticultural shows – is happy to share some secrets. For example, in order to get the sort of pin-straight, giant parsnips and carrots required for the prize-bench, you’ll need to sow the pre-chitted seed in March into lengths of drainpipe plunged into old oil drums kept in a polytunnel and filled with a mix of peat, soil and carefully positioned fertiliser. He’ll tell you how to keep onion foliage ship-shape, and potatoes free of blemishes. Or why, to have the best chance of growing prize-winning ‘curds’, it’s necessary to succession-sow cauliflower seed every fortnight from March until the end of April.

Ask him for the secret of the perfect exhibition-standard tomato, and Harold’s answer also gives some clue as to the weird and wonderful world of champion vegetable growing, where good looks are everything. “Apart from colour and shape, it’s a lot to do with the size of the calyces in proportion to the fruit. Too small, and it looks all wrong,”

A conversation with this veteran, deeply knowledgeable horticulturist teaches other valuable gardening lessons, such as the importance of having an open and inquiring mind, even when you’ve clocked up long years of experience as well as many prizes. “I always say that it’s never too late to learn something new.”

Which is why last autumn found Harold and his grandson Colin in Wales, assessing the potential of the most recently introduced show-bench varieties of vegetables and listening to the advice of other growers as participants in the World Master Class Weekend held by Harold’s good friend Medwyn Williams. An eleven-times Chelsea Gold Medal Winner and president of England’s National Vegetable Society, Williams is an internationally-known champion vegetable grower who knows his onions: so much so that he’s a regular judge at the Tullamore Show.

“Medwyn and I met many years ago at a show and have been friends ever since. We’d always have a drink together when he’s over in Ireland,” says Harold.

But hugely knowledgeable as he is, even Harold can’t explain why there aren’t more women in the world of champion vegetable growing “To tell the truth, I can’t even explain why I love it so much myself. It’s a mystery,” he says.

Do something different in the garden this year, by sowing your very own pictorial annual meadow, as seen used en-masse in the wonderful London Olympic Park of 2012. A range of long-flowering, colourful mixes, designed to suit a variety of garden soils and growing conditions, are available to order online from pictorialmeadows.co.uk. These seed mixes can be sown March-May and will flower from early summer until late autumn.

Keep a careful eye on weeds at this time of year, by hoeing, hand weeding and mulching.

Continue to prick out young seedlings into modules/small pots filled with a good quality potting compost to prevent them from becoming leggy/ succumbing to disease, while making sure to protect them from low temperatures.