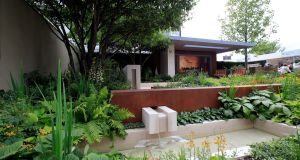 Paul Martin’s garden for which he won a gold medal. Photograph: PA

Dundalk-born Paul Martin and Dublin-born Diarmuid Gavin were named among the winners as the event opened its doors to the public yesterday. Both designers are graduates of the National Botanic Gardens in Glasnevin, Dublin.

The designer’s show garden is sponsored by Vestra Wealth which is owned by Fermanagh-born businessman David Scott.

This is the first time that Mr Martin has exhibited a show garden on Chelsea’s main avenue, making his success all the sweeter.

Mr Martin said he was excited to win the award and wanted to thank his team who had worked “tirelessly” to deliver a “very high standard” garden.

“I am thrilled and delighted to win gold with our first major show garden on the main avenue at Chelsea Flower Show. It’s a great golden morning at Chelsea,” he said.

Diarmuid Gavin is a seasoned, seven-times exhibitor on Chelsea’s main avenue, having won a bronze medal in 1995 as a young, unproven designer taking part in the show for the first time.

He won gold in 2011 and, while a second gold medal has eluded him, his show gardens always draw the crowds. This year’s exhibit was awarded silver gilt.

The exhibit is called The Harrods British Eccentrics Garden and is sponsored by the London store. Mr Gavin described it as an homage to the English cartoonist and satirist Heath Robinson, and other well-known English eccentrics such as Rowland Emmett, who invented Caractacus Potts’ weirdly wonderful machines in the classic children’s film Chitty Chitty Bang Bang.

Both men were keen to emphasise the support they received from the world of Irish horticulture.

A small team of Irish garden designers, including Bernie Torpey, Deirdre Pender and Una Thomas, travelled to London to assist Mr Martin in the final stages of planting.

The RHS Chelsea Flower Show continues until Saturday May 28th.

Michael Harding: The tree that broke my heart will be born again
9

‘Waiting for your children to die, knowing that it can happen at any time, is crushing’
10