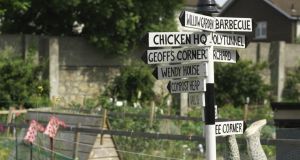 These gardens bring nothing but good to a community, enriching many lives in many different ways.

While it’s difficult to put an exact figure on how many community gardens there are in Ireland – 200? 250? – it’s fair to say the majority have been created within the last decade. They’ve sprung up in our parks and city squares, on disused parking lots, derelict building sites and patches of wasteland, within the grounds of churches, schools, and apartment complexes, even inside historic walled gardens.

Increasingly these places where local communities come together to garden collectively, productively, sociably and sustainably, are also urban farms in miniature, where it’s not unusual to find bee hives, hens, turkeys, pigs, or the occasional cow sharing space with the plant life. Many are also educational and therapeutic plots, a lucky few with bright, purpose-built classrooms where students are immersed in nature. In other words, these gardens bring nothing but good to a community, enriching many lives in many different ways.

That’s all very well, I sometimes hear people say, but how do you go about coaxing such gardens into existence, and what does it realistically require of a community in terms of manpower and funds? To find out, I visited the multiple award-winning St Brigid’s community garden in Dublin, an astonishingly productive and atmospheric little spot, just yards from the busy N11 .

Created in 2009 by a core group of dedicated local residents led by former resource teacher and general dynamo Caroline Jolley, it’s situated within the grounds of St Mary’s School, on about half an acre of land.

Despite its relatively compact size, this tranquil, leafy garden space, which is managed entirely on a voluntary level and is used by a remarkably diverse range of groups within the community, is home to two bee hives, a large chicken run and a small meadow used in the recent past to raise saddleback pigs, turkeys and goats, while its many raised beds are filled with food crops and flowers. There’s even space for a small, sun-filled classroom, a polytunnel and an apple orchard, while the garden’s old stone walls are hidden behind a line of medlar trees.

What words of wisdom, I wondered, could its gardeners offer to groups hoping to establish something similar? “Start small,” suggest founder member Caroline, “with a handful of beds, a minimum of rules, and a core group of like-minded people who share your enthusiasm and determination and who don’t easily get discouraged. I always say that cheek and charm in equal measure eventually open any door. Building links with other community gardens, via the Community Garden Network founded by Carlow-based blogger and horticulturist Dee Seewell, is also very helpful (see greensideup.ie). And keep a diary!”

As for the challenges to be faced when it comes to creating any community garden, the first and most obvious is finding a suitable site. Driven by the belief that a community garden had much to offer her students, especially those on the autistic spectrum, Caroline asked the local rector for permission to use a large expanse of lawn once earmarked for a building project.

Sunny, sheltered and enclosed, it proved the perfect spot. “Once I got permission, I started introducing myself to neighbours and community groups to explain what we were planning and to build friendships. With a community project like this, it’s so important to engage with visitors and be open to offers of help, which come in different and unexpected ways.”

An example is her chance introduction to Peter Brown, a retired sea captain and former kitchen gardener at Airfield, who now works voluntarily in the garden several days a week. “Peter’s taught us all so much about the fundamentals of growing your own food.” Another key member is local resident and expert vegetable gardener Geoff Lovegrove (Caroline’s godfather), who, within a few months of joining , found himself bottle-feeding two young goats destined for the charity Bóthar. “Bottle-feeding goats . . . I’d never even helped to bottle-feed my own children!”

He works in the garden every day, where his horticultural and carpentry skills are put to great use repairing fencing, creating signage, laying paths, tending vegetable beds, cutting grass and maintaining the large, three-bay compost heap. Other key members include horticulturist Loyola O’Carroll, and Margot Jones, who comes from a public arts background: their skills have also proved invaluable to the project.

As for funding, it comes through a variety of channels, some formal, some informal. Plants, soil, tools, timber and a wide range of skills are often sourced within the community, while other materials are cleverly recycled/upcycled, Larger, more expensive items, such as the polytunnel, classroom, raised beds and solar-powered poultry “arks” were bought with the help of grants and awards; one of the more sizeable grants came via the late Angela Sweeney, a community officer with Dun Laoghaire Rathdown County Council, after whom the garden’s orchard is named. Monies also came from the local VEC, local drama group the Stillorgan Players, Dublin Bus Community Spirit Awards, the GIY/ AIB Get Ireland Growing Fund, the RDS Allotments Awards and the Corrin Hill Biodiversity Gardens Awards. Open days, raffles, garden barbecues, bartering, and egg sales (via an honesty box) also help with ongoing expenses such as buying seed and animal feed.

As regards keeping poultry and rearing animals, not only does it add hugely to the ambience of the garden but it’s also a valuable educational tool for St Brigid’s pupils, many of whom use the garden weekly as members of a children’s gardening club run by the group.

“It’s that old idea of the birds and the bees. The fact that some of the animals were being raised for meat was one that we introduced very gradually and very sensitively,” explains vegetarian and community gardener Margot Jones, “although the children have been impressively pragmatic about it”.

But the final words on this beautiful, bountiful garden belong to Loyola. “This garden” she says wryly, “ is my sanity . . . a place where I come to play with my friends.”