Going Dutch with a master in the garden

What turns a gardener into a plant collector? Single mindedness and an obsessive streak help 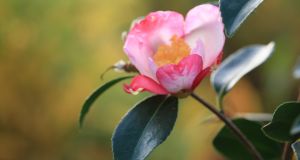 My latest fascination has been Camellia sasanqua cultivars. The flowers appear in autumn, the plants are much more elegant in habit than their spring-flowering counterparts, Camellia japonica, and have sweet scented flowers. 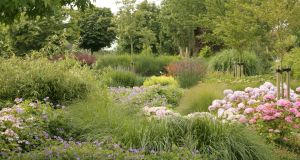 Hydrangea and grasses planted by van Gelderen, who is also a garden designer 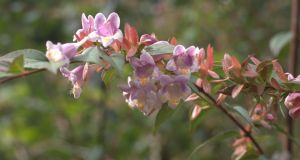 At the moment we are running a trial on Abelia in Holland. But the good old Abelia engleriana is still a favourite 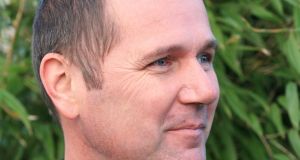 Dutch nurseryman and plant breeder Cor van Gelderen, who is coming to Dublin for the GLDA’s International Design Semina 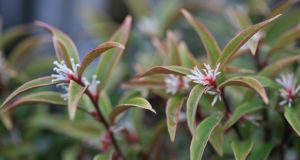 Sarcococca hookeriana var digyna: All of our Sarcocca’s have a strong scent, when in flower.

Unlike some gardeners I know, I’m not a plant collector. Nor do I ever expect to be, for I lack the single mindedness and the ever-so-slightly obsessive streak required to zealously hunt down every known species/variety/cultivar of a particular genus. So when the esteemed Dutch nurseryman and author Cor van Gelderen recently told me that his first big plant ‘crush’ – the Buxus genus – led to him building up a collection of more than 130 kinds of box plants, my reaction was a mixture of admiration and bemusement.

Admiration, primarily, because without plantspeople such as van Gelderen, who built his collection as a teenager in the 1970s by scouring botanic and historic gardens for rare species or historic varieties, so many garden-worthy plants would quietly become lost to cultivation. Not only that, a valuable gene pool as regards future plant breeding would become diminished.

But bemusement, too. How is it possible to fall so deeply in love with a genus of plants that most of us grow simply as a form of tightly sheared topiary or hedging?

Quite easily, according to this genial Dutchman, who will be one of the speakers at the Garden & Landscape Designers Association (GLDA) seminar later this month.

Van Gelderen’s obsession with this shrubby evergreen started off quite modestly. “After I was expelled from school when I was 17 [he bet his fellow pupils that he could slide down the school staircase banisters and land on a statue of the school’s founder, with predictably disastrous results], I decided to give up on formal education.

“Instead, I travelled around Europe and the US, working for some of the best specialist nurseries. It was around this time that I stumbled across a few old nursery catalogues from the early 20th-century, listing varieties or species of Buxus that I’d never heard of. That sparked my initial curiosity and it grew from there.”

As the fifth generation of a family of distinguished nurserymen and women, it would be fair to say that a passion for plants, especially the shrubby/woody kinds, is almost part of van Gelderen’s genetic make-up.

He lives and works in Boskoop, a town in the province of South Holland known throughout the world for its tradition of professional horticulture and its numerous plant nurseries (roughly 750 at present). One of the trees that takes pride of place in his family nursery, Plantentuin Esveld (esveld.nl), is a venerable specimen of the golden full moon maple, Acer shirasawanum ‘Aureum’, planted in the 1860s by his great-great grandfather, Cor Esveld. The latter acquired it after rescuing a misdirected shipment of plants sent from Japan by the 19th-century German botanist and plant collector Philipp von Siebold.

As for his teenage passion for Buxus, van Gelderen’s all-consuming interest in this particular genus has gradually abated over time, to be replaced with others. “I have a naturally restless mind, so once I’ve fully studied the possibilities of any particular genus, then I move on.”

Maples (the Acer genus) are now one of his great loves. Not only has he created a collection, or Aceretum, of more than 1,000 kinds, but he also breeds them. Another passion is the Hydrangea genus, as are the genera Abelia, Osmanthus, Pieris, Lonicera, Sarcoccocca, Ilex, Azalea (Japanese) and Enkianthus. Most recently, he has also developed a fondness for the autumn flowering Camellia sasanqua, with the result that the nursery now stocks more than 75 different cultivars.

As for the total and rather dizzying number of different plants propagated by his nursery, which exports to customers all over the world, it is now in the region of 7,000. Which is proof of how truly addictive the plant collecting bug can be, as well as of the generosity of fellow gardeners and plant collectors. “Over the years, I’ve swapped plants and scion wood with gardening friends all over the world.”

While best known as a plantsman, nurseryman and author (he co-wrote two books with his late father, Dick van Gelderen, for Timber Press, and is currently working on his third book), van Gelderen also works as a designer and consultant. Some of his best known projects include the restoration of the historic rhododendron gardens of the Gooilust estate in north Holland, Park Clingendael in The Hague, and the re-planting of the Keukenhof’s Japanese gardens.

As a nurseryman and plant breeder whose particular passion is for woody plants, what, I wonder, does he make of the current worldwide popularity of massed planting of herbaceous specimens – or the Dutch Wave as it’s sometimes known – as popularised by his countryman, designer Piet Oudolf.

It turns out that Oudolf is an old family friend (according to van Gelderen, it was his father who advised Oudolf to establish his perennial nursery in Hummelo). “I am a great admirer of Piet’s work. But it’s a shame to see so many young garden designers so heavily influenced by what they believe is stylish that all they want to do is copy it, when instead they should be responding to a particular garden’s circumstances and its sense of place.” The GLDA’s 20th International Design Seminar, Ebb &Flow East/West Landscape Design Influences, takes place at the Crown Plaza Hotel, Santry, Dublin 9 on Saturday, February 20th

1. Abelia engleriana: At the moment we are running a trial on Abelia in Holland. But the good old Abelia engleriana is still a favourite. An elegant evergreen shrub that flowers for months in a row.

2. Enkianthus perulatus: The most difficult one to grow is Enkanthus perulatus, with pure white flowers. This Japanese plant is extremely rare, the majority of plants labelled E. perulatus are Enkianthus campanulatus cv.

3. Acer shirasawanum ‘Aureum’: Its broad golden leaves in spring are of particular beauty and although it will eventually grow to be 15ft high and wide, it’s a fairly slow-growing maple, perfectly suitable for the smaller garden.

4. Hydrangea paniculata ‘Dharuma’: ‘Dharuma’ is a compact cultivar, with reddish branches and flowers that turn pink in summer.

5. Osmanthus delavayi: One of 35 Osmanthus in our collection, but certainly the most elegant. A lovely scent is commonplace for Osmanthus, not least for this Chinese evergreen species.

7. Sarcococca hookeriana var digyna: All of our Sarcocca’s have a strong scent, when in flower. Sweet box is renowned for that quality. But not so many share the elegance of this variety. The pinkish red stems add to their beauty.

8. Buxus sempervirens ‘King Midas’: From the more than 130 different boxwoods, ‘King Midas’ is still the only one I know off that has yellow foliage. That is to say, other boxwoods may turn yellow, but give them something to eat and they will turn green again.

9. Pieris japonica ‘Katsura’: Still the cultivar with the most spectacular wine red spring foliage of them all.

10. Camellia sasanqua ‘Rainbow’: My latest fascination has been Camellia sasanqua cultivars. The flowers appear in autumn, the plants are much more elegant in habit than their spring-flowering counterparts, Camellia japonica, and have sweet scented flowers.