Do like the Dutch and put a bench outside your house

In Amsterdam, the Bench Collective movement has seen about 1,000 informal get-togethers outside homes with tea, coffee and, sometimes, salsa 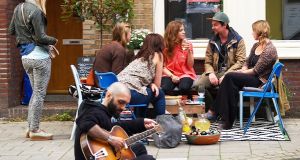 Have you ever tried to sit down in central Dublin? Try as you might you won’t find a public bench around Henry Street or Grafton Street. Temple Bar, the most pedestrianised area of Dublin, has only a handful of places to sit. City officials both in Ireland and abroad claim that benches attract anti-social behaviour, by which they appear to mean the congregating of teenagers or homeless people seeking to avoid sleeping on the cold ground.

Are public benches dangerous items of urban furniture that need curtailing? This seems to be the attitude of city and town councils, both in Ireland and abroad, where seating is being removed as the “commonage” or realm of public space is increasingly curtailed and privatised.

When new public spaces are designed like Temple Bar Square or the plaza beside City Hall on Dame Street in Dublin with inadequate seating we as citizens are robbed of a key social amenity: primarily the potential for spontaneous engagements and serendipitous encounters with people we would otherwise never meet . . . or, even just the ability to linger, to reflect for a moment and watch the world go by.

For some members of society the absence of a bench can mean exclusion from public life. All of us will find it more challenging to get around at some point: a walk to the local shops or through town brings backache, breathlessness or a racing heart. Often, all that is needed is a short rest, a moment to recover, and without public seating the choice is either to rest against a wall or squat down on the pavement like we did as toddlers. The humiliation of having to do this even once can spell the end to a person’s independence – next time they drive or stay home. According to Age Action, the humble bench can radically impact the usability of a city; being the difference between exclusion and inclusion in urban life for the elderly and less abled.

For certain architects and town planners these ideas are common sense: in Galway, Mitchell + Associates’ redevelopment of Eyre Square is designed around the concept of public seating and the new Rosie Hackett Bridge over the Liffey near the Abbey Theatre incorporates two long benches looking out over the river as a key component. It was designed by Seán Harrington Architects and it’s fascinating to see people gravitate to the east-facing one in the morning and the westerly one in the afternoon, like cattle in a field. Harrington also designed the pedestrian and cycle boulevard linking Tallaght Village and Tallaght shopping centre, with south-facing seating along its length.

Local authorities claim there is less need now for public seating since cafes and shops provide tables and chairs outside their premises. This trend is particularly advantageous for councils because of the taxes they can charge on private pavement seating.

A “table and chairs” licence costs €100 annually in Dublin, with an added €125 annual fee per table, and pavement rental of between €200 and €500 per sq m. In Cork city, businesses must pay a non-refundable €150 fee just to apply for a licence and provide evidence of public liability insurance of not less than €6.5 million. It’s a masterful example of the commodification of the public realm: first you re-categorise public seating as a potentially anti-social threat and then charge others to provide a replacement and to insure against any risk that might arise.

We can either let this happen, or start sharing our own outdoor space. All you have to do is put a bench outside. (bankjescollectief.nl/en/)