Dig In: Bittersweet smell of autumn is in the air 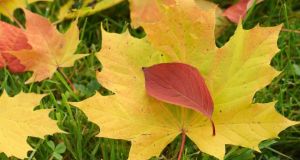 ‘What, for you, are the quintessential smells of autumn? The musty whiff of fallen leaves? The sweet fungal odour of gently decaying foliage?’ Photograph: Richard Johnston

What, for you, are the quintessential smells of autumn? The musty whiff of fallen leaves? The sweet fungal odour of gently decaying foliage? Maybe the earthy tang of freshly weeded ground or the fruity perfume of windfallen apples? Or perhaps it’s something much harder to define . . .

When Norwegian artist, chemist and smell scientist Sissel Tolaas was commissioned by the US’s Smithsonian Design Museum last year to create a smell inspired by New York’s Central Park, she set herself the challenge of recreating the particular smell of the park in autumn. That might sound impossible, but Tolaas has forged a very successful artistic career from her ability to harvest and replicate thousands of distinctively different smells, from the pong of David Beckham’s sweaty runners to the stench of Parisian slaughterhouses.

Fascinated by humans’ complicated and often highly emotional relationship with the world of smell, she has even devised a “nose language” or “vocabulary of olfaction” that she calls Nasalo. It is based on an archive of more than 7,000 smells and 2,500 scent molecules that Tolaas has collected over the last 20 years. Housed in a lab in the artist’s Berlin studio, these are kept in hermetically sealed glass jars and aluminium boxes. Examples include everything from the smell of concrete and dusty brick to old graveyards, money and wet football.

To capture the smell of Central Park in autumn, which Tolaas describes as “the beauty of decay”, the artist took her trusty tool – a sort of high-tech vacuum cleaner – to the park for several days last October. She used it to harvest the park’s own particular blend of seasonal smells: fallen leaves, warm earth, jarveys’ horses, the sweaty bodies of joggers and even the whiff of catfish looted by local fishermen from its pond. Using a technology called microencapsulation, that final, complex, blended smell of New York’s Central Park in autumn was then embedded, as a kind of scratch- and-sniff coating, on to one of the Smithsonian Design Museum’s walls. Currently on display and called Smell, The Beauty of Decay, visitors who touch this installation are transported, via their sense of smell, to a particular place and time . . . just as every Irish gardener is whenever that distinctively bittersweet smell of an Irish autumn drifts by on the air, reminding us to use our noses as well as our eyes to savour the year’s turning. See /iti.ms/2dn4uNx and researchcatalogue.net