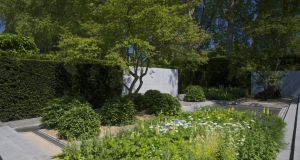 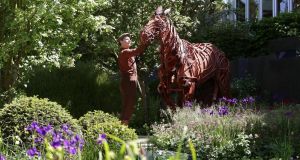 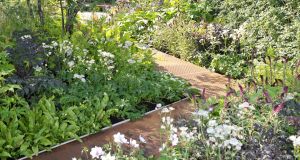 There’s surely no other garden festival in the world quite like the annual spectacular that is the Chelsea Flower Show. Where else would you find men in full chainmail, a model in a dress made entirely of orchids, a full-sized wooden replica of a silverback gorilla, a giant talking robot called Titan, a nonagenarian potter (Mary Wondrausch), a man on a horse, and the actor Rowan Atkinson reciting poetry to a hoard of photographers, all of them – along with the queen of England – shoe-horned into a historic London square. Which is not to mention the most important stars of the show . . . the gardens. And the plants.

This year’s Chelsea saw a host of newcomers (a lot of photogenic young, male newcomers) join the ranks of show-garden designers on its main avenue in pursuit of a coveted gold medal. Just one succeeded. That was Hugo Bugg (27) with his RBC Waterscape garden, a polished, contemporary interpretation of a raingarden where a perforated corten steel walkway sliced past a “cracked earth” concrete platform and through a grid of planting panels filled with drifts of purple-flowering Iris ‘Gerald Darby’, rushes, lime-yellow Euphorbia wallichii and the decorative crimson flower spikes of Lysimachia ‘Beaujolais’.

Leading the charge for seasoned Chelsea show garden designers was Cleve West (a four-times previous gold medal winner) with the M&G garden, a modern re-working of a Persian “paradise” garden. West’s planting was masterful. Sensuous swaths of grasses, bulbs and perennials (sweet rocket, catmint, Anchusa ‘Loddon Royalist’ ) in lilac, blue and white sat beneath four handsome specimens of the beech-like Zelkova serrata ,while towards the front, a jewel-box mix of sun-loving plants were artfully interplanted to create a tapestry of texture and colour. The gold-medal winning garden’s clipped yew hedges intercut with a sculptural “engraved” stone wall and its trickling garden rills were also elegantly beautiful, but the design of the looming stone fountain (designed by West and comically reminiscent of a certain part of the male anatomy) was jarring and possibly cost him Best in Show.

That went to Luciano Giubbilei – another Chelsea old hand – for his Laurent-Perrier garden. Giubbilei is known for his uncompromisingly formal city gardens but in this case that formality was tempered by lush planting of perennials in shades of lemon, purple and violet, with repeated use of the yellow lupin, Lupinus ‘Chandelier’.

Formal yew hedges were intercut with walls of metal and polished concrete, specimens of the snowy mespil, Amelanchier lamarckii, were underplanted with low beech mounds and a cedar sculpture by the artist Ursula von Rydingsvard occupied a corner while a very large, formal pool took centre stage.

It was expertly executed and very lovely but I couldn’t shake the feeling that I was looking at a beautiful garden of remembrance.

That said, I much preferred the Laurent-Perrier garden to the gold-medal winning Telegraph garden by Tommaso del Buono and Paul Gazerwitz, an unexciting, slightly leaden and overly formal design with some strangely ugly elements, not least its waterwall.

The ugliest garden award must, however, go to Paul Hervey-Brookes’ BrandAlley Renaissance garden for a bizarre design that was crude pastiche.

But not to worry, for there was plenty more to like in the showgrounds. Among my favourite gold medal-winning showgardens was No Man’s Land, Londoner Charlotte Rowe’s brave design for ABF The Soldiers’ Charity. It was leafy, watery and tranquil, with a mysterious dark pond edged with Asarum europaeum and a grassy mound that promised a cool escape from the heat and dust of London’s pavements.

Adam Frost’s Homebase Garden, with its jagged slices of stone, rugged wooden benches and frothy, wildlife-friendly planting, was equally deserving of gold. While they didn’t win gold, Welsh brothers David and Harry Rich took silver-gilt flora for their Bord na Móna Night Sky Garden – not bad for a couple of 20-somethings exhibiting on the main avenue for the first time.

The garden’s oak-framed studio with its curling spiral staircase and atmospheric rooftop views of native birch trees, stone walls and rough-hewn boulders was something that will have inspired many visitors.

As would Matt Keightley’s confident and accomplished Hope on the Horizon garden (another silver-gilt flora winner) designed to support Help for Heroes, the UK charity, and Patrick Collins’ beguiling understated A First Touch garden which showed how, rather than being a hindrance, a steeply sloping site can be used to great advantage.

Of the two other categories of garden (10 in the Fresh category and seven in the Artisan category) competing for medals this year, I preferred those in the latter. Three in particular were charming: inspired by the theme of “topia opera”, The Topiarist Garden at West Green House (a silver-gilt flora winner) used a fantastically oddball mix of plants to create something that looked as if it came straight out of Alice in Wonderland – you expected the Mad Hatter to poke his whiskery snout out from among the white foxgloves and twisting sugar-canes of box.

Dial-A-Flight was a potter’s garden inspired by Farnham pottery at Wrecclesham which was abandoned after the first World War but recently restored. Poignant, exquisitely detailed and beautifully planted, it is an example of how a garden can be far more than the sum of its hard landscaping and plants.

It won gold as did Ishihara Kazuyuki Design Laboratory’s Paradise on Earth garden, the overall winner in the Artisan category. A shady, green and mossy space through which a tiny paddlewheel circulated water, it was a marvel of engineering and design.

Six things I wanted to bring home n An Armadilla. No, no, not one of those strange rat-shaped mammals with an armoured shell but a hip new take on a garden room that fuses centuries-old traditional boat building techniques with modern construction (armadilla.co.uk). n A Cacoon. It’s a lightweight outdoor seat-cum-hammock-cum-swing, with a sleek design based on the Mexican weaver bird’s nest; a sort of ultra-comfy hanging pod in which to chill out and escape from it all (hang-in-out.com).

n A tiny tear-dropped, handcrafted, hanging terrarium from theurbanbotanist.com. It’s a garden in miniature. Irish stockists include mosscottage (moss.ie) and howbertandmays.com n A giant fat-bellied Cretan pot from potsandpithoi.com, the UK firm which has over 120 pot designs in 240 sizes.

n One of the ash-handled forks or spades that Great Dixter’s gardener Fergus Garrett has designed for the Dutch firm Sneeboer (pronounced “ssnayboor”). Perfect for very tight spaces in the mixed border.

n Seed of the wonderful, chocolate-leaved, deep lilac-flowered Lunaria annua ‘Chedglow’, a plant discovered in a Wiltshire garden a few years ago. The garden’s owners got in touch with Avon Bulbs, who’ve since been busy building up enough stock. At £4 a packet, this one I did bring home with me.

The plants As the temporary home to hundreds of exhibitors, including many of the world’s leading nurseries, the Great Pavilion is the place where gardeners go to discover the best, the most exciting and the newest plants.

I just loved . . . The Discover area of the Great Pavilion, especially the young artist Oliver Jennings’ Bio-symphony: Music of the Plants exhibit. Based on 30 years of research by Devodama, a spiritual-eco community based in Italy (which Jennings has visited), his exhibit analysed the electro-magnetic signals of plants, using them to create video and audio outputs (musicoftheplants.com).

Of the four plants wired to the monitor, the noisiest by far was a bromeliad. According to Jennings, none of the plants were too fond of Chelsea’s Great Pavilion when they first arrived, remaining stubbornly silent for the first couple of hours. The project has made Jennings totally rethink his view of plants: “Now I see them as conscious beings.”