Champion allotment-grower shows how it is done

How is the gardener to get everything sown, planted and trained in the busy month of May? 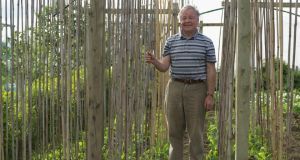 This is the month when I want to holler at Mother Nature to hold on for just one second. Or two. The month, as it slips so quickly through my fingers, that I want more time. Lots more. Enough to sniff the elderly lilac bush in perfumed flower. Enough to earth-up those baby potato plants pushing their way towards the light. Enough to net fruit bushes, to dead-head spring bulbs, to carefully train clematis so they don’t end up as a crazy tangle of stems, to thin lines of tiny carrot and parsnip seedlings, to ventilate the glasshouse, to cut the grass and yet still somehow or other remember to water pots of fragrant young basil plants. Enough time, to sow, to hoe, to weed and to grow, as well to just sit and watch.

Exactly how do other gardeners manage the mad juggle that is the month of May? To find out, I visited the Donabate allotment of award-winning plot-holder and champion sweet pea grower, John Warren – a man who somehow manages to makes it all look easy.

Warren is the sort of gardener to whom other plot-holders refer, in awed and admiring tones, as an old-timer. He is the sort of gardener whose potatoes are always sown and earthed-up on time and which are of such exemplary tastiness and flouriness that they expose their shop-bought equivalents as the impostors that they are. Weeds never get the upperhand in Warren’s allotments because long before they might do so, they are hoed and hand-pulled with the sort of military precision that takes the rookie gardener’s breath away.

Likewise, he is never without a home-grown salad because he always remembers to successionally sow. The same goes for his tomatoes; side-shoots are never allowed to get the run of themselves, while his carrots are without fault and his brassicas caterpillar-free.

He grows vegetables and cordon- trained sweet peas to show-bench standard; the sort of standard where points are deducted for the most minor blemishes near-invisible to the untrained eye, and where the awarding of first place versus second rests on a knife’s edge.

In 2011, he won the RDS Experienced Allotment Gardener Award, while he’s a member of the Fingal Horticultural Society, the treasurer of the National Vegetable Society, the reigning All-Ireland Sweet Pea Champion and the winner of countless awards at the various horticultural shows that take place throughout the summer months. In other words, John Warren is a man who knows his onions.

He’s been a plot-holder at Turvey Allotments, the Fingal County Council-managed site in Donabate, north Co Dublin, since 1987– long before the idea of growing your own became a fashionable thing to do. He took on a second plot in 1996, while his third plot, taken on in 2009, is in the Fingal Allotment site, in the Naul. So just how does he juggle it all?

Timing, he says, is everything – he keeps a detailed gardening diary which helps to remind him of important tasks. Managing weeds, is a case of “a stitch in time”. “I keep a constant eye on them and never let them get to the stage where they’re starting to set seed.” He carefully staggers sowing of many crops (tomatoes, potatoes, leafy salad crops), to avoid a sudden glut and to guarantee a regular supply of produce throughout the summer and early autumn months. At this time of year, he also keeps a very close eye out for pests and diseases.

“Where possible, I use companion planting – planting carrots next to onions, for example, to deter carrot fly. At the first sign of greenfly, I use a home-made spray made of rhubarb leaves.

“From late May/early June, I also spray potatoes with a protective fungicide to prevent blight, which is a real problem when you grow on an allotment where the disease very quickly spreads from one plot to another.”

Timing aside, time (as much of it as possible) is also crucial when it comes to effectively managing an allotment in early summer.

Reassuringly, even Warren admits that it’s difficult to find enough of it to complete every one of the 101 chores that ideally should be carried out at this time of year. “You just can’t. But what you can do is to prioritise the most important of those jobs. Regular watering of young pot-grown plants, for example, is essential. Otherwise you’ll lose them. So is careful watering and ventilation of polytunnels or glasshouses, as the temperature can quickly get dangerously high at this time of year.

Nipping out side shoots and feeding young tomato plants with a potash-rich liquid feed is also well worth it because it pays rich dividends. The same goes for earthing-up potatoes. Just make sure that the soil you’re using to earth them up is free of weeds, otherwise you’re storing up trouble for yourself.”

Brassicas are raised under cover from seed, each individual plant being transplanted out in early summer (about now) after first being carefully hardened off. When the young plant goes in the ground, it gets its own circular collar to protect it from cutworm and cabbage fly, while netting protects it from cabbage butterflies.

Tender plants – courgettes, French beans, sweet corn – are also sown under cover and planted out around this time. His prize-winning sweet pea plants, meanwhile, are sown in autumn and then transplanted out in late spring. Each gets its own bamboo cane, up which it will be carefully trained (rather than string, he uses plastic cable ties to hold the growing plant in place).

Successful gardening as practised by John Warren, I realise, is akin to a ballet, a sort of horticultural Swan Lake where the pas des deux is a duet performed by gardener and nature. Which is not to say it’s without hiccups.

“Every gardener will experience failure at some stage,” he says resolutely. “One year might be great for sweet pea, for example, but terrible for something else – potatoes perhaps, or carrots. It’s important to accept that but to also learn from it. That ’s what good gardening is all about.”

How to have a happy Halloween, Christmas and St Valentine’s this winter
8