What it went for: Auction results

A boycott notice, a library and a bronze Bloomsday 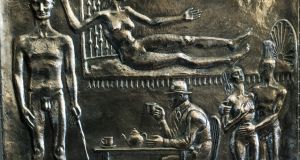 Sunday (April 3rd) Hegarty’s Auction Rooms, The Bypass, Bandon, Co Cork. Antiques auction at 3pm. To include the contents of the collection of the late Margaret Ridgeway, founder of the Kilcolman National Nature Reserve in Doneraile, Co Cork, including items previously in the collection of Doneraile Court.