The Irish art of summer: Bray, Sligo or Spain?

Auctions at Whyte’s and Adam’s on view this weekend 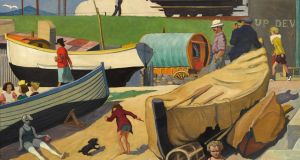 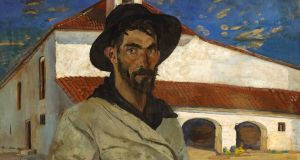 Bray in Co Wicklow used to be a popular – even fashionable – seaside resort until the Irish public realised that guaranteed sunshine was just a shortish flight away to the Costa del Sol.

But in the early 20th century travel to Spain was restricted to the very wealthy – or desperate.

A nostalgic painting of Bray, dated 1935, entitled [Miscellaneous Objects], North Bray Harbour, County Wicklow by Harry Kernoff, estimated at €30,000-€50,000 is a highlight in Whyte’s pre-summer auction of Irish art at the RDS.

A catalogue note, written by Kathryn Milligan, quotes from a 1930s Irish Times feature on “holiday attractions” that praised Bray for its “fine esplanade and good facilities for bathing” and the “best of hotels and boarding houses”.

Describing the painting, Dr Milligan writes: “Against a blue sky, an idle train carriage stands on the embankment, and the frame of a gasometer (demolished in 1979) can be seen in the upper left hand corner.

While some figures rest easy, such as the girl tentatively tanning her legs from the shadow of one of the boats or the man in a peaked cap enjoying his pipe, others are imbued with a sense of purpose and movement: a well-dressed woman walks resolutely past the pleasure-seekers, and a boy, perhaps fresh from the water, leaves with a towel wrapped around his shoulders. The Traveller caravan is a colourful if slightly anomalous addition to the composition, while the ‘Up Dev’ slogan hints at the underlying political context of the period.”

By contrast, the auction includes a painting by an Irish artist in Spain – in the 1920s. Salud by Seán Keating (€35,000- €45,000), previously known as Self Portrait at the Hacienda, was purchased by Lady Longford from the artist in 1926 and, in 1949, given as a wedding present from Edward Pakenham, sixth Earl of Longford, to the parents of the vendor.

Also by Paul Henry is West of Ireland Road Through The Bog, estimated at €50,000- €70,000. Auctioneer Ian Whyte said: “Paul Henry’s paintings define any art collection and continue to represent a quality investment.” He added that both paintings were “quintessential impressions of the western idyll, whose impact continues to be felt to this day and should attract competitive bidding”.

Viewing at the RDS, Anglesea Road entrance, begins today from 10am; the auction will take place in the same venue on Monday evening at 6pm. There is also online bidding via whytes.ie.

The top lot here is a very different beach scene: a Jack B Yeats painting entitled By Drumcliffe Strand, Long Ago (€80,000- €120,000) formerly owned by the late Lord Killanin.

Seán Keating also features with the oddly named Bush Telegraph (€60,000-€80,000), which shows two Aran Islands women sitting on a harbour wall. In a catalogue note, Éimear O’Connor says, of the title: “The artist is actually referring to the main method of communication among the islanders – word-of-mouth relay that travelled at speed from one end of the islands to the other.”