An estate map made in 1828 was discovered in the loft of an outhouse belonging to the Viscounts de Vesci, who planned the town 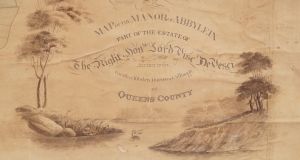 Map of the manor of Abbeyleix, Co Laois, which is reputedly the oldest planned estate town in Ireland 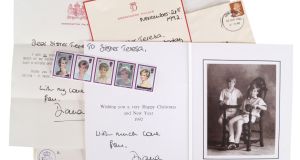 Some of the correspondence from Diana, Princess of Wales, to Sr Teresa of the Little Sisters of the Assumption 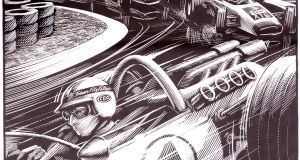 The outgoing Minister for Foreign Affairs Charlie Flanagan took a brief break from election canvassing in his Laois constituency to drop into his local auctioneer, Sheppard’s in Durrow, to see an important estate wall map – long believed lost – that has been found almost 200 years after it was drawn.

The map of the Abbeyleix Manor estate was discovered in the loft of an outhouse that once belonged to the Viscounts de Vesci.

It is on display today at Sheppard’s and will go under the hammer in its two-day auction that gets under way on Tuesday, March 1st.

Auctioneer Philip Sheppard said: “It’s one of the most significant estate maps to be offered at auction in recent years” and “reveals the extensive layers of subtenants who had fractured the land into smaller farms and enclosures and helps illuminate the process of demographic expansion in the Queen’s County in the decades immediately prior to the Famine.”

He hoped it might be bought by a public library as it could “help academic researchers further understand the growth and development of pre-Famine Abbeyleix in particular and Co Laois in general”.

The map was commissioned by John Vesey, second Viscount de Vesci (1771-1855). The de Vesci family planned and owned Abbeyleix, which is reputedly the oldest planned estate town in Ireland.

The vendor, who wishes to remain anonymous, was said to be “extremely excited” when he discovered the map.

The Map of the Manor of Abbeyleix, part of the estate of The Honourable Lord Viscount De Vesci, situate in the Parish of Abbeyleix, Barony of Cullenagh and Queen’s County [now Laois] is estimated at €1,500-€2,500.

The auction, entitled Classical Convergences: Antiques, Art & Accent, features more than 1,200 lots and the catalogue can be viewed at sheppards.ie

Also included is lot 430, previously unseen correspondence sent, in 1992, to an Irish nun, Sr Teresa of the Little Sisters of the Assumption, by Diana, Princes of Wales (€800-€200); and lot 1166, the original artwork for an illustration by artist David Rooney, Pole Position, commissioned by and published in The Irish Times, of Seán FitzPatrick – former chairman of Anglo Irish Bank – as a Formula 1 driver (€200-€300).

What will €1.25m buy in the Caribbean, Scotland, Sweden and Rathfarnham?
6

‘Moving overseas is daunting, but he took it in his stride’: An Irish woman walks for her dad
7

Enya breaks her silence on fame, privacy and music
8