Late collector’s treasures to be auctioned 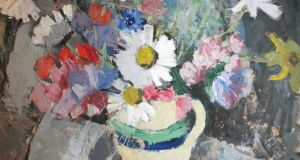 About one-third of the items are from the estate of the late racing correspondent Tony Sweeney, one of Dublin’s best-known collectors, who died last year. Highlights include a 17th-century Chinese ginger pot with a “unique” Irish Charles II silver lid, made in Dublin in 1680, and decorated in the Chinoiserie style with exotic birds among foliage and estimated at €3,000-€5,000.

A selection of attractively framed Victorian oil paintings includes: The Reading Lesson by George Hardy (€10,000-€12,000) and The Bird’s Nest by William McTaggart (€8,000-€12,000). Among the more unusual lots are: a rare pair of George III Irish silver cuff buttons (the antecedents to cufflinks) made by George Nagle in 18th-century Dublin (€500-€700); a framed Hermès silk scarf depicting the coronation of Napoleon (€300-€400); and an Edwardian hatbox from Derry and Toms, the former High Street Kensington department store, containing a period set of Punch and Judy painted papier-mâché hand puppets retaining the original costumes (€100-€200).

This is a very interesting auction with a wide range of high-quality items and viewing, from 11am to 5pm today, is recommended.

On Tuesday evening at the Clyde Court – formerly Berkeley Court – Hotel in Ballsbridge, de Veres is holding two auctions. At 6pm, lots of Irish and international art go under the hammer and then, separately, from 8pm, “Design” – described as “the first sale in Ireland devoted exclusively to the modern idea of furniture”.

Viewing for both auctions begins at the hotel tomorrow from 11am, including talks on contemporary art, The Good, the Bad and the Ugly – what’s really going on with Contemporary Art , by the critic Gemma Tipton at noon and on 20th century furniture design by Barry Sheehan, managing director of Sharc Design and Sheehan Architects, at 12.45pm.

Best known for her still-life paintings, Redpath is represented in various public collections in Britain including those held by the National Gallery of Scotland and the Tate in London.

Some of the pieces in de Veres’ sale are from the collection of the late Howard Robinson – a banker, major art collector and the father-in-law of former president Mary Robinson – including Lot 16: an Aubusson tapestry Garlanded Goat by Louis le Brocquy, one of an edition of nine, estimated at €60,000- €90,000.

Childcare: ‘So, you go out and take the child kicking and screaming from the car?’
10