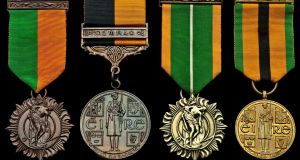 Medals belonging to Bridget Connolly, who served in the 1916 Rising and War of Independence, which sold at auction for $7,250 in New York on Thursday

Leading items failed to sell at a major auction of Easter Rising memorabilia in New York, including the medals later awarded to Seán T O’Kelly, a former president of Ireland.

Ironically, the top price in the Spinks auction came when a bidder offered $9,500 for medals awarded to one of the IRA’s top targets during the War of Independence, Irish-born British army officer Captain Campbell Kelly.

He was stationed at Victoria Barracks, Cork, during the War of Independence where, the auctioneers said, “one of his tasks was to interrogate captured IRA terrorists”.

The unnamed buyer bought the lot which included his Military Cross, George Cross and a rarely-issued “Ireland ‘Special Intelligence Operations’ Order of the British Empire”.

He survived a number of IRA assassination attempts in West Cork and returned to live in England.

He was court-martialled out of the army for fraud in 1928. He died in 1942, a year after he was convicted of bigamy.

The highest price for an Irish lot was achieved for medals awarded to the Co Carlow-born veteran Miss Bridget Connolly of Cumann na mBan for her roles in the GPO during the Rising and later in the War of Independence.

He served in 1916 with the South Dublin Union Garrison. He was shot in the lung and spent months in hospital recovering.

According to the auctioneers, “he was subsequently dismissed from The Irish Times for ‘disloyalty’”.

Medals awarded to Lieutenant-Colonel Henry Garwood, a member of the ‘Cairo Gang’ who avoided assassination on Bloody Sunday, 1920, because he had spent the night in a brothel – sold for $4,750.

However, some of the medals with the highest estimates failed to sell, including a rare 1916 ‘Casualty’ medal posthumously awarded to Thomas O’Reilly, who was mortally wounded in the GPO.

The medals awarded to Maj Gen William Lowe, the officer who assumed command of the British army in Dublin after the Rising and later accepted the unconditional surrender of Patrick Pearse, also failed to sell.

Some of the unsold lots would have sold in Ireland, said Dublin auctioneer, Ian Whyte.

Items bought in New York face 23 per cent VAT when they are brought back to Ireland, along with shipping costs.

Tiede Herrema: ‘The kidnappers were nervous. So was I’
7