David Bowie’s Irish art to be shown in Dublin 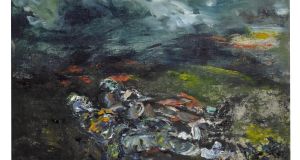 The announcement by Sotheby’s this week that a Jack B Yeats painting had unexpectedly turned up in the art collection of the late David Bowie has sparked Irish interest in the auction of the late singer’s estate.

Bowie, who died earlier this year, was well-known as an art collector. Hundreds of his paintings and pieces of 20th century design furniture have already been consigned to Sotheby’s and will go under the hammer in London in November.

The collection is being exhibited during a world tour in London, Los Angeles, New York and Hong Kong ahead of the auction. However, a selection of four paintings from the Bowie Collection chosen specifically because of their interest to Irish collectors will be shown in Dublin this week.

A watercolour titled James Joyce by Louis le Brocquy, dated 1981 from the artist’s Portrait Heads series of paintings is estimated at £10,000-£15,000.

There are two paintings from the Bowie Collection by William Scott, the Scottish painter who lived for a time in Enniskillen and Dublin and who died in 1989. Sotheby’s says Scott’s work will be of interest to Irish collectors.

Róisín Ingle: I’m menstruating as I write this. And I’m mad as all bloody hell
9 Tesla wants an electric Golf rival
10