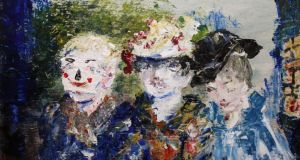 Results from three big auctions in Dublin this week suggest the market for fine art and antiques is in robust shape. On Tuesday, Adams Blackrock in south County Dublin sold the remaining items from Lyons Demesne – the Co Kildare mansion owned by the late Tony Ryan, the co-founder of Ryanair and a well-known collector. Some 80 per cent of lots sold including a 19th- century “George I style” side table, with a lion mask frieze, which made €25,000 – more than three times the top estimate (€6,000-€8,000); a double portrait of Robert Mason, of Masonbrook, Loughrea, Co Galway, and Sara Monck, unsigned but believed to be by Charles Jervas which made €21,000 (€8,000- €10,000); and, a Victorian stained-pine post box, bearing a brass plaque inscribed The Albany Club, €1,700 ( €400-€600).

At Adam’s, St Stephen’s Green, on Wednesday, 95 per cent of lots sold in an auction of a private collection of silver where the top lot was a Georgian Dublin beer jug, with the mark of Thomas Bolton, weighing 27ozs, which sold for €8,500, more than four times the top estimate €1,500-€2,000.

Comfort eating your way through the pandemic? You’re not alone
10