Bernard Canavan exhibition opens at the Kenny Gallery in Galway 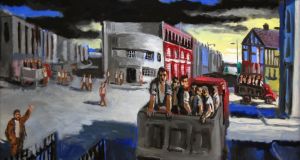 Detail from ‘Ireland’s Crossroads, Camden Town’ from the Bernard Canavan exhibition at the Kenny Gallery in Galway until December 11th

A new selling exhibition of paintings by London-Irish artist Bernard Canavan, under way at the Kenny Gallery in Galway, is likely to appeal to the many people affected by mass-emigration from Ireland to England in the 1950s.

Edgeworthstown, Co Longford-born Canavan’s paintings have been described by Gearóid Ó Tuathaigh, a member of the Council of State and professor emeritus in history at NUI Galway as “an extraordinarily powerful visual narrative” of an often-overlooked aspect of Irish social history.

More than 400,000 people emigrated from Ireland in the 1950s – mostly to England – with the men generally going to work as labourers in construction and women employed in the National Health Service (NHS), factories and domestic service.

Ó Tuathaigh said the “psychological pain” caused to both the emigrants and those left behind was deeply felt and had gone “unchronicled for a very long time”.

Canavan’s last exhibition in Galway – in 2012, titled Exile World prompted an emotional public response and strong demand for some of the most powerful paintings led to print copies going on sale. This new exhibition, Scenes from a Disembodied Past features images of emigrants on the boat to Holyhead, arriving at Euston station and their daily lives in London.

Among the oil paintings is Ireland’s Crossroads, Camden Town (€2,200) which depicts the infamous daily hiring fair, where Irish labourers were selected by sub-contractors; The Irish Mail, Euston (€1,200), which shows a group of headscarved women carrying cardboard suitcases arriving in the London railway station; and The Progress of Dreams (€2,200) which shows a procession of emigrants – overseen by a bishop – en route to digging trenches.

Kenny’s said that many 20th century Irish artists had been preoccupied with depicting the west of Ireland as a rural idyll but had ignored “such contentious topics as economic hardship, emigration, the domination of the Catholic Church and various abuses”.

Unlike them, Canavan, who emigrated as a nine-year-old child with his family in 1959 and “worked in the usual unskilled emigrant labouring jobs on construction sites and in factories” before becoming an artist, has, instead, tried to “redress the lack of contemporary comment about the plight of Irish navvies and nurses in London”.

‘Scenes from a Disembodied Past’ – a selling exhibition of new paintings by Bernard Canavan, the Kenny Gallery, Liosbán Retail Park, Tuam Road, Galway, Monday to Saturday, 9am to 5pm until December 11th