Auctions and fairs: A guide to this week’s events 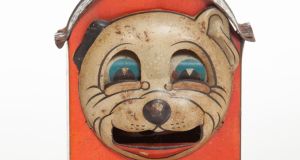 The death of the bra: Will lockdown’s great lingerie liberation last?
7