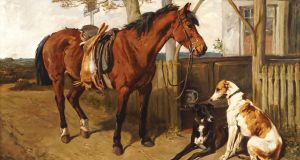 Tuesday, March 7th: Christie’s, London. Evening auction of Post-War and Contemporary Art. A drawing (oil stick on paper) Untitled 1982 a self-portrait by American artist Jean-Michel Basquiat, owned by the U2 guitarist Adam Clayton, sold for £2.2 million (€2.5m) – above the top estimate of £1.5 million (€1.7).

Tuesday, March 7th: Christie’s, Paris. The auction of contents from the Palais Rose of Boniface de Castellane and Anna Gould realised a total of €14.2 million with 96 per cent of lots sold. Lot 46, Piazza San Marco, with the basilica and the campanile by Francesco Guardi made €6.7 million – the highest price achieved by far for an old master painting sold at auction in France over the past two decades; Lot 19, the Jardin Japonais desk set – designed to look like an oriental garden and made of coral, jade, rock crystal, pearls, lapis-lazuli, mother-of-pearl, lacquer, diamonds and enamel – achieved €1.1 million, a new record for an object by Cartier sold at auction.