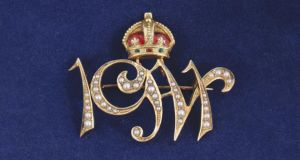 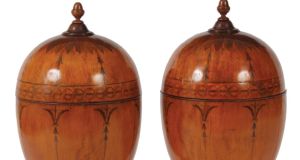 Autumn, season of mists and mellow fruitfulness and the return of Downton Abbey. Fans of big house life – and they are legion – will have a field day at Sheppard’s auction next week. The saleroom in Durrow, Co Laois is filled to overflowing with the remnants of grand country house life for a sale titled, appropriately, The Legacy of the Big House.

Almost 1,500 items will go under the hammer during the three-day sale on Tuesday, Wednesday and Thursday, September 24th-26th. Three days of viewing begin on Saturday next, September 21st.

From portraits of his lordship’s hunting dogs to Victorian copper jelly moulds that could have sparkled in Mrs Patmore’s kitchen, the catalogue reads like an inventory of the intertwined worlds of upstairs and downstairs. Where else to find a brass candle-snuffer or a cast-iron foot-scraper?

Among the many highlights is a pair of Georgian knife urns, described by Sheppard’s as “stunning” and possibly by William Moore, the renowned Dublin furniture maker, is estimated at €8,000-€12,000, see photograph above. Urn-shaped knife boxes which were placed on pedestals flanking a dining-room sideboard were fashionable accessories in late 18th century high society.

A revolving dial French clock of the Louis XVI period (1754–1793), from a private collection in Co Offaly, is described as “rare and very handsome” and features “a joyful and chubby Cupid” indicating the time with his right index finger. The clock, which has been in storage for 40 years, is, thought to be similar to one commissioned by Marie Antoinette and is estimated at €8,000-€12,000.

A pair of 17th century Flemish tapestries depicting biblical scenes from a private Dublin collection is also estimated at €8,000-€12,000.

As always, Sheppard’s has unearthed some exceedingly quirky items, most notably, on this occasion, a lot with the intriguing description “coffin for mummified cat” (€5,000-€8,000). Auctioneer Philip Sheppard said “the internal cavity [of the bronze] was intended to preserve the mummy of a cat” and that a “large numbers of cats, associated with the goddess Bastet, were mummified and buried at sites throughout Egypt during the period 700BC to AD100” .

A very different era of decorative art is evoked by a Belleek Pottery figure titled “Erin Awakening From Her Slumbers” (€4,000-€6,000). The “exceptional Celtic Revival piece” was designed by Dublin- born sculptor, William Boyden Kirk (1824-1900) and depicts Erin as “a beautiful woman standing on a layered flagstone ford across the Erne river”.

Among the jewellery is an attractive gold brooch made to celebrate the Coronation of King George V in 1911 (€1,400-€1,800), see photograph above.

Among the more affordable lots and one likely to attract golfers’ interest is an early 20th century Scottish Sunday Walking Stick (€200-€300). The Church of Scotland’s disapproval of Sunday sport led to the popularity of “Sunday Clubs” or “Sabbath Sticks”, golf clubs disguised as walking sticks. Enthusiasts could walk a links on Sunday and occasionally, and surreptitiously, indulge. This would make a perfect Christmas gift for a golfer.