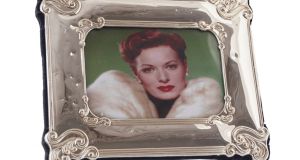 Silver framed photo of Maureen O’Sullivan to be sold in auction.

Luxurious fur coats and sparkling jewellery owned by the late Maureen O’Hara – Ireland’s most famous Hollywood star – are to go under the hammer at a Sheppard’s auction later this month. Last year, memorabilia associated with her Hollywood career, most notably the film The Quiet Man, was auctioned by Bonhams in New York. But Sheppard’s said an unnamed private collector has consigned some 250 items of O’Hara’s – with a combined top estimate of €500,000. They will go on public view in Sheppard’s, Durrow, Co Laois saleroom from Saturday, November 25th before the auction on November 29th.

Born Maureen FitzSimons in Ranelagh, Dublin, in 1920, Maureen O’Hara died in 2015, aged 95, in the United States. She had spent much of the previous decade at her west Cork home, Lugdine Park, near Glengarriff. She was best known for playing the role of Mary Kate Danaher opposite John Wayne in the role of Sean Thornton in The Quiet Man (1952), a film regarded by many as a great cinema classic and by others as the epitome of stage-Irish kitsch. She appeared in more than 60 films and was awarded an honorary Oscar in 2014.

Bidders on tighter budgets might like a piece of O’Hara’s costume jewellery – a crystal emerald necklace has a modest estimate of €400-€600 and comes with a photograph of her wearing it. However, it should be borne in mind that many items with low estimates in the New York auction sold for multiples of the estimates. For example, a group of nine pieces of costume jewellery including two Tara brooches – with a top estimate of $600 – sold for $5,625.

Sheppard’s said the collection would also include various items of clothing owned by O’Hara including silk scarves by Hermès and other makers, evening gowns and jackets and fur coats. The most opulent item is a full-length, silk-lined white mink coat trimmed with Arctic fox fur by the French couturier Christian Dior with an estimate of €3,000-€5,000. A brown sable fur coat, with a label from Sam Rone, the famous Parisian furriers at Rue du Faubourg St Honoré in the 8th arrondissement, is estimated at €4,000-€6,000.

Other interesting lots include a silver cigarette case bearing the initials “W.P.”, O’Hara’s second husband, Will Price (she was married three times) – and inscribed “Will from Maureen 6-5-40” (€300-€500).

An Yves Saint Laurent leather shoulder bag is estimated at €200-€300. O’Hara may have been rich and famous but she still counted her pennies. Sheppard’s said the bag still “contained 32p in old Irish coins”.