A mid century suite and a stunning Irish teapot: what’s coming up in the auctions

Salesrooms are bouncing back after a disruptive period of storms, snow and an early Easter 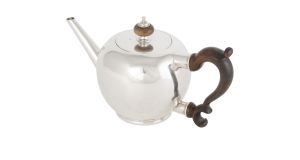 The auctioneers said the sale is “a must-see for hoteliers and those in the business of interior design with an interest in recreating an interior reminiscent of Versailles itself”.

If French opulence is not your style, then “for those looking for a slightly more subdued living space, the contents of a Castleknock property will also be offered”.

Also on Monday, Milltown Country Auction Rooms in Dromiskin, Dundalk, Co Louth are holding an antiques auction at 12 noon. The 700 lots include the “complete house contents from No 5 Queen Street, Warrenpoint, Co Down and 150 lots of china from Riverside House, Drogheda”. Viewing today 10am-5pm and tomorrow, Sunday 12noon-5pm.

At 2pm on Monday, R J Keighery’s City Auction Rooms in Waterford are holding an auction with a gardening theme at 2pm which – well-timed for spring – includes 500 lots of garden seats, urns, gates, pots and tools. Separately, and of interest to hoteliers, there are 100 lots of restaurant ovens, fridges, crockery and stainless steel counters. See antiquesireland.ie

On Wednesday, (April 11th) Herman & Wilkinson Auction Rooms, 161 Lower Rathmines Road, Dublin 6 are holding a Jewellery and Coin auction at 6pm followed on Thursday (April 12th) by a Fine Art auction at 10am. For more details on both, see hermanwilkinson.ie

There’s a big selection of Irish silver most notably Lot 29, a George I Irish silver bullet-shaped teapot (see above) made in Dublin in 1715 by silversmith Thomas Bolton described as “a stunningly beautiful piece of silver-smithing by a very sought after Irish maker, the unusual design for these pots was inspired and influenced by the Indian and Burmese examples brought back particularly from military expeditions in the colonies” (€10,000-€15,000).

Art highlights in the sale include, Lot 287, a Victorian painting of horses entitled Feeding Time, an oil-on-canvas by John Frederick Herring Snr €4,000-€6,000