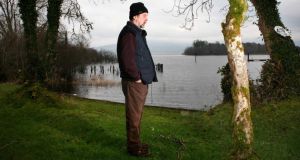 I was in a cheap cafe one morning recently, eating eggs and sausages, when a text surfaced on my phone saying that an old friend had died.

All around me young couples were devouring breakfasts, as young ones do, after sex. They were all talking about the previous night’s fun in some club. My old friend would have sneered at that: the very idea of clubbing in rural Ireland was to him a kind of surrealism.

There was a clock on the wall that showed New York time, and another one telling Irish time, which was helpful, because one couple at the next table were so absorbed in each other’s eyelashes that I doubt if they knew what continent they were on, never mind what time it was.

My old friend loved New York. It was a place where human alienation had evolved into a new aesthetic, he said – a place where the great poet of modern times, Robert Lowell, had died alone in a taxi, which in itself was almost poetic. My friend was an undergraduate back then.

In the cafe the young woman’s face was still transfixed, as if she were drowning in desire. As if she might just rip off her partner’s shirt at any moment, were it not for the proximity of other customers.

Anonymity of the sexual act
The undergraduate would have approved of that too. He would have urged them to take three minutes out, and do it in the washroom.

That was the amazing thing about modern culture, he said: that humans could find such exquisite anonymity in the sexual act.

But that was only an undergraduate fantasy. He didn’t make love in many toilets himself, as far as I know. In fact, he never really engaged with modern life at all as he grew older.

Of course, he adored Debbie Harry. Not that he knew her. But the idea of her is what got him: the ironic blonde in a man’s world. She had the fragrance. The cool punk goddess, the cheap Marilyn Monroe breaking through the fog of sweaty sincerity was the poster queen that claimed his undergraduate heart. Ordinary humans bored him.

He wasn’t really my friend. I hadn’t seen him for 35 years, except for one night in a hotel, where I found him alone in the corner of a foyer, talking to himself.

That kind of thing was funny when we were students. Back then he ranted with fluid verbosity, spinning out wheels of intellectual horse manure that no one else could understand. It was an undergraduate indulgence. And it even endeared him to some, who considered his disturbed dysfunction to be a kind of poetry.

But it was unfortunate that he stuck with a poster of Debbie Harry instead of the real thing. And it was a tragedy that he remained forever an undergraduate, ranting alone, with no one to witness his lyrical side except the ghost in the mirror.

But I know he argued with his own shadow. I know he was obsessed with the idea that the modern world was an ocean of chaos, and, as he grew older, he fought it like a mad Cuchulainn fights the sea.

On the day he died, there were huge waves in Mullaghmore. Young surfers were chasing the big barrels. They cruised in 4x4s along the coast, with cameras stuck out the windows.

Almost romantic
I saw a woman in a wetsuit swimming in circles through the surf, and sometimes vanishing for seconds beneath the white foam. At first I thought she was a seal in trouble with the tide, but then she emerged and walked directly towards me. And she was waving. It was almost romantic, the way she came up the strand.

Her black wetsuit wasn’t sexy, and felt as cold as a fish when we embraced.

If my undergraduate friend had been there, I guess he would have sat on the bench, at a safe distance, aloof from any danger of intimacy, looking like Philip Larkin in a stupid hat. But the swimmer was only saying hello, and she didn’t look much like Debbie Harry anyway.

Reborn in a barn: A farm-fresh take on rural design
10