Why don’t men go to the doctor? 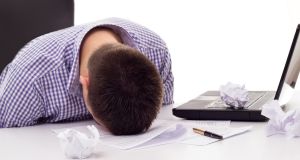 The widespread view among men is that illness means weakness. Photograph: Istock

How many times have you passed off a symptom of illness as being something small that will go away by itself? If you’re a man, research tells us that you have probably done this throughout your life, perhaps suffering detrimental health outcomes in the process. The effects are far reaching, too. Men die on average five years younger than women. Where does the problem come from?

According to Paul Gilligan, clinical psychologist and chief executive of St Patrick’s Mental Health Services, men can often see healthcare as a threat to their concept of masculinity.

“It’s the conceptualisation of masculinity that impacts on the value that men put on their health and how they manage their health,” says Gilligan. “The research tells us that men’s health outcomes are worse than females, and there are two subgroups of that: men from lower socioeconomic backgrounds; and younger men would be the higher risk groups. Those are the groups that are likely to engage in more risky health behaviour. Primarily, they [the researchers] believe that it’s driven by a need to prove their masculinity, or what their concepts of masculinity are.”

Gilligan says that this is particularly noticeable in the mental health sector, where he works.

“The majority of people who present at mental health services are female. You’re talking roughly three to one,” he says. “And yet, when you look at the stats around the actual emergence of mental health issues, it’s pretty much even.”

The challenges men face in accessing healthcare is something that Finian Murray, men’s health development officer with the HSE, has been trying to combat. As part of his work he runs training courses to help men and health professionals to engage better with men’s health. Like Gilligan, he believes that the widespread view among men is that illness means weakness.

“The message we pick up as boys is that real men sort out their own problems, which explains why men are less likely to consult their GP,” he says. “It’s a big part of the issue. Men do see the health arena as a female dominated space, but that’s also true for mental health issues. We’re trying to get across to men that it’s OK to not feel OK, and it’s OK to ask for help.”

Murray says that creative methods of engaging men in a conversation about their health is the way forward. He favours initiatives such as Men’s Sheds, a community run endeavour that encourages men to come together to take part in group activities. The movement encourages openness in a culture where men tend not to talk about their feelings.

What can be done to encourage men to look after their health better? Gilligan says that the issue is a complex one that requires societal change.

“To tackle and to improve men’s health, you need to tackle the concepts around how we define and develop their concepts of masculinity, and that starts in childhood. That’s where we really have to focus our efforts,” he says.

“I think this speaks to our parenting of children in general, and boys in particular. It points to the need to focus ourselves on building emotionally healthy children. I think we have to be very careful; gender identity is a very important thing in helping people to understand what it is to be a man or a woman or male or female, that’s very important. But alongside that, we need to teach them generic emotional health skills. There are things like good self-awareness, good self-esteem, body awareness, emotional awareness, so that they become comfortable in developing the skills and the awareness relating to those areas. That enables men to protect and look after their health. If you focus just on health, that’s a mistake. This is around building a holistic approach to psychological and emotional wellbeing.”

Despite this, Dr Nina Byrnes, GP at the Generation Health Clinic in Glenageary, Co Dublin, says that the situation has already started to shift.

“I think we’ve changed in our attitude, but it’s maybe taking a while to sink through to all generations,” she says. “We are now much more open about talking about physical injuries. I think from a mental health point of view, we are still a bit behind with men. Men aren’t as good at talking about their emotions. Even with all the publicity we have, they do maybe see it as a sign of weakness if they’re not coping. But from a physical health point of view, I think less so.”

In her 12 years as GP, Dr Byrnes has noticed a change particularly among young men, who are increasingly health conscious, she says.

“One of the things I’m seeing a definite change in is that there’s a real drive, particularly among young men, to be healthy. They have an interest in health and lifestyle and nutrition. I think they are presenting more for check-ups than they would have 20 years ago.”

‘The wife or the mother’

However, the situation is not the same across all demographics, and it is often the women in men’s lives that encourage them to seek healthcare. When that influence is not there, the effects can be damaging.

“It is often the wife or the mother who encourages them to go to their doctor and even still comes with them. You will see adult men coming in with their wife or mother. I think maybe the middle-aged single men still aren’t great at going to the doctor. That sort of cohort, men in their 50s, 60s and beyond and still single wouldn’t be great at presenting to the doctor.”

However, Dr Byrnes reiterates that change is happening, and the drive to get men to engage more with their health is working. “I think that the more we talk about it, men are getting better. I’m seeing more men coming in for check-ups and willing to talk about their health, willing to get checked. I think the more we promote healthy lifestyles, the more those barriers come down.”