Want to be happy? Spend money on things that will save you time 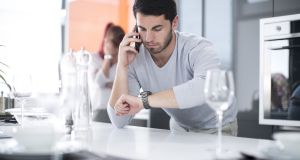 A study has found that spending money to save time may reduce stress about the limited time in the day, thereby improving happiness. Photograph: Getty Images

It’s a question central to daily life: Do you spend money to save time or spend time to save money?

Well, if happiness is the goal, you might consider opening that wallet. That’s what a study, published this week in the Proceedings of the National Academy of Sciences, has found.

Its findings suggest that spending money to save time may reduce stress about the limited time in the day, thereby improving happiness.

“People who spent money to buy themselves time, such as by outsourcing disliked tasks, reported greater overall life satisfaction,” said Ashley Whillans, an assistant professor at the Harvard Business School and lead author of the study, which was based on a series of surveys from several countries.

Researchers did not see the same effect when people used money for material goods.

In one round, Whillans and her colleagues surveyed nearly 4,500 people in the United States, Denmark, Canada and the Netherlands on well-being and timesaving purchases, such as ordering takeaway food, taking a taxi, hiring household help or paying someone to run an errand.

In another round, using a broader definition of such purchases, they surveyed about 1,800 other Americans.

About 28 per cent of those in the first round and half in the second reported spending money to save time.

In both cases, those who made such purchases reported greater life satisfaction than those who did not.

And it didn’t matter if they were rich or poor: people benefited from buying time regardless of where they fell on the income spectrum.

The authors note, though, that may not hold true for the poorest of the poor.

The surveys established a link between buying time and happiness, but the researchers wanted to see whether one causes the other.

So they conducted an experiment with a few dozen Canadians.

First, they provided the participants with $40 on two consecutive weekends to spend, as directed, on either timesaving purchases or material purchases, like board games, fancy wine or clothes.

Then, they asked the participants their mood at the end of the day.

As the researchers predicted, spending money to save time appeared to reduce time-related stress and increase well-being, while spending on material goods did not have the same effect.